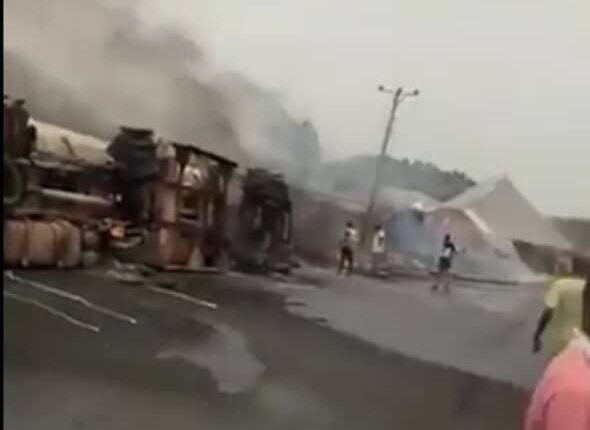 No fewer than seven persons have been confirmed to have died, dozens of others injured after a tanker exploded in Oshigbudu, Agatu Local Government, Benue State.

It was learnt that the tanker experienced brake failure, skied off its lane, spilled content on the road and exploded few minutes after, razed down about 50 houses within the community.

As gathered, the casualties would have exceeded seven but several of the residents were reported to have flee the axis after the tanker skied off its lane and fell by the side.

The Executive Secretary of the Benue State Emergency Management Agency, Dr Emmanuel Shior, confirmed the statistics to newsmen on Sunday in Makurdi, the state capital.

He said about 50 houses were destroyed from the information he got the local government chairman, adding that a detailed assessment would be carried out tomorrow when he visits the scene of the explosion.

Shior conveyed the condolences of the Benue State Governor, Samuel Ortom, who he said, has directed for a comprehensive audit of the fire incident and report back.

He also commiserated with those who lost their loved ones and properties to the fire.

Earlier, the Commissioner for Youths and Sports and an indigene of the area, Ojotu Ojeme, had confirmed the incident and commiserated with the victims of the explosion, calling on the government at all levels and spirited individuals to help residents of the area.

“The fire inferno at Oshugbudu in Agatu local Government, my local government of origin today, 18-04-2021 which has claimed so many lives and destroyed properties yet to be quantified, is the Chief of all the calamities that have fallen us this year,” he said.

“As I pray  God to comfort the good people of Agatu and most especially those directly involved, over the lost, I wish to call on Government at all levels and spirited individuals to come to our aids in order to drastically reduce the effect of the disaster on the people. Once again may God grant us the fortitude to bear the huge loss.”