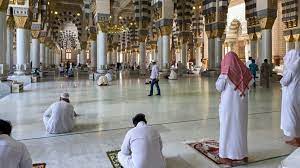 Activities in and around mosques in Saudi Arabia have started returning to normal with more worshippers getting set to converged within the religious centres to perform their prayer sessions and other rites after the country’s government relaxed compulsory use of face masks, social distancing, and other COVID-19 protocols ahead of next year’s hajj.

Also, Muslim faithfuls have expressed joy that the worship centres would be opening fully after over 18 months of partial closure occasioned by the spread of Coronavirus to the Arabian nation.

The activities around the religious centres on Saturday, according to Nigerians living in the country who spoke to The Guild, have changed after the government announced the new COVID-19 protocol, with every citizen in the country anxious to witness the full reopening of mosques and abolition of social distancing during their worship session.

Also, it was learnt that the new directive by the government, through the Ministry of Interior, has attracted the attention of Muslims globally who were affected by decisions of the Saudi government to limit the number of pilgrims allowed to perform Hajj rites, since the outbreak, to citizens.

They wished that the virus does not spread further and that the Saudi Arabia government completely lift restrictions placed on worship centres before the 2022 Hajj in the country.

The Saudi Ministry of Interior had announced that, due to a significant nationwide decline in COVID-19 cases as well as the Kingdom’s high vaccination rates, a number of restrictions have been relaxed and that the directives take effect beginning from Sunday, October 17.

Aside from the reduction in cases, the government was said to have announced the directives after over 50 per cent of the country’s population, 20.6 million, were account to have received their COVID-19 jabs across the country.

The ministry announced that face masks would no longer be mandatory in outdoor settings, except for certain specific locations including the Grand Mosque in Makkah and the Prophet’s Mosque in Madinah, where all visitors and staff must still wear masks.

It noted that the two mosques would return to full capacity, but visitors must be reserved through the Ministry of Health-approved apps, Eatmarna and Tawakkalna.

In addition, social distancing would no longer be mandatory at social gatherings and in public settings including transport, restaurants, cinemas, and more. Wedding halls will also be allowed to return full capacity.

However, a number of precautionary measures, the government stressed, would remain in place for people outside of their homes, including temperature checks upon entry into establishments and health status checks via the Tawakkalna app. Public and private establishments will still be required to make hand sanitizer widely available.

Social distancing and face masks would still be mandatory in locations where Tawakkalna health status checks were not applied within the country.

The government noted that the Health ministry would continue to monitor the number of COVID-19 cases resulting in hospitalization and admittance to Intensive Care Units (ICU).

It meanwhile warned that if red flags were raised due to the relaxation of rules, then precautionary measures will be re-introduced in cities, governorates, or regions as necessary.