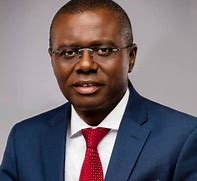 The Lagos State Goverment has disclosed that its Governor, Babajide Sanwo-Olu, his wife, Dr. Ibironke Sanwo-Olu and their aides have tested negative for the coronavirus infection.

It explained that  Sanwo-Olu, his wife and personal aides had gotten tested for the contagious viral infection and that thehr test results had returned showing them negative for the disease.

The State Commissioner for Health, Prof. Akin Abayomi, thanked Lagosians for their concern about the governor and his household’s well being, stating that they had been certified healthy by the test results.

Abayomi confirmed the state’s first family negative test results through tweets on his official twitter account in early hours of Friday, and expressed his happiness that Sanwo-Olu, his family as well as staff had not contacted the pandemic.

The commissioner assured Lagosians that the governor would continue in his drive to combat coronavirus in the state, and urged that people should give support to government precautionary directives against the disease.

He reiterated that measures such as increased personal hygiene, regular hand washing and social distancing were with aim to aid government in its fight against further spread of the infection in the state, calling on the people to uphold the preventive directives.

Abayomi expressed his belief that Lagos state was set to overcome the deadly viral pandemic and added that such giant strides as had been recorded were made possible through the shows of support and understanding by the state residents towards government.

“I am happy to announce that #COVID19Lagos Incident Commander, Governor Babajide Sanwo-Olu @jidesanwoolu, the first Lady of Lagos @jokesanwoolu and their immediate family members as well as aides have all tested negative to #COVID19,”

“We thank Lagos residents for their concern and support. We urge all to maintain social distancing. Together we can defeat #COVID19! Please stay safe #ForGreaterLagos”.