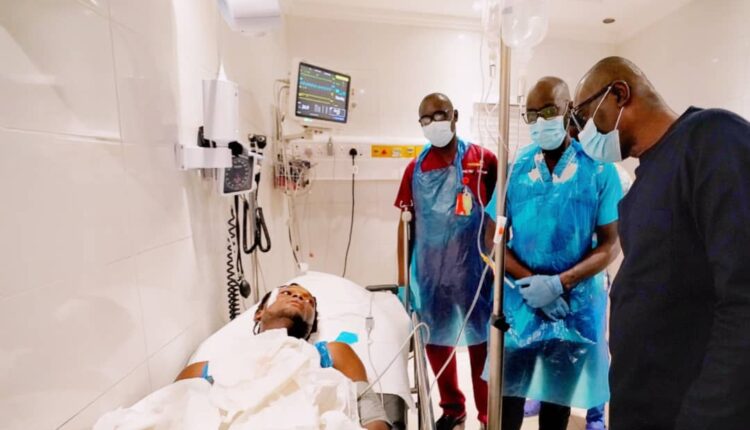 The Lagos State Governor, Babajide Sanwo-Olu, has visited victims of the shooting at Lekki tollgate and said that no fewer than 25 EndSARS protesters that sustained gunshot wounds were currently on admission in the state.

Sanwo-Olu, who disclosed that three of the protesters that sustained mild injuries have been discharged by medical officials, added that victims were currently admitted at three hospitals within Eti-Osa Local Government after military officers shot at the protesters.

Through a statement made available on its official social media account on Wednesday, the governor denied ordering the attack on protesters at the scene, just as he described the event that played out at the protest ground as unacceptable.

He said: “As a Father and Governor, I watched in anguish the unacceptable event that occurred last night at the Lekki tollgate. And I paid a visit to all the victims of the unfortunate shooting incident at the various hospitals where they are being urgently attended to”.

According to him, 10 victims were being treated at the General Hospital, 11 at Reddington multi-special hospital, and four hospitalised at Vedic medical facility.

The governor, who confirmed that the victims sustained mild to moderate levels of injuries, but two were receiving intensive medical care, explained that the curfew imposed on the state was a measure to protect residents of Lagos.

Sanwo-Olu added that all decisions taken by the government particularly the 24 hours curfew imposed on the state, were indications that the present administration prioritise the welfare of the victims of the unfortunate incident and the over 20 million residents of Lagos.

“This is the toughest night of our lives as forces beyond our direct control have moved to make dark notes in our history, but we will face it and come out stronger,” he said.

The governor also gave an assurance that the state government would continue to monitor and ensure that all the injured victims were given the best care.