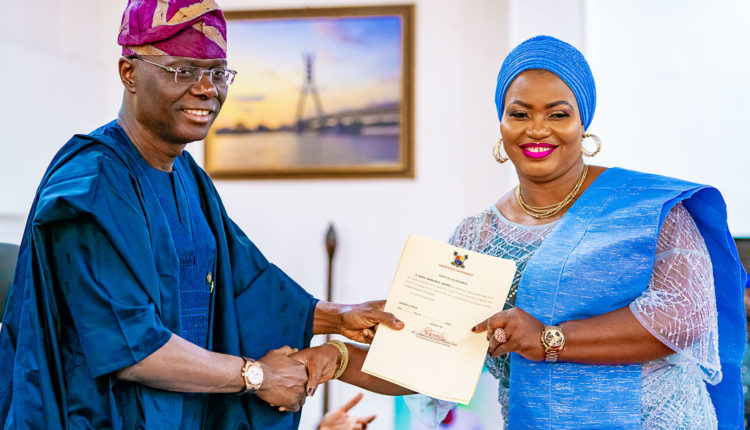 It would be recalled that Oyesanya died days ago after battling a prolonged illness, leaving leadership of the local council development area rudderless and necessitating the choice of his vice-chairman as a successor to his seat.

Sanwo-Olu explained that Onikosi, was being sworn-in in accordance to provisions made by the constitution and that since she had recently been vice-chairman, it was expected that the transition would be seamless and beneficial to people of Ikosi-Isheri LCDA.

Speaking at the swearing-in ceremony in Lagos, on Thursday, the governor, after congratulating Onikosi on her new position, had highlighted importance of local government as the tier of government closest to citizens and that it was, therefore, expected to have direct positive impacts on lives of residents within its area of concern.

He said that his administration’s Greater Lagos agenda could only become reality when local government areas giving greater dividends of government to residents of their council.

“I congratulate Princess Onikosi Abolanle Fammy who, until now, was the Vice Chairman of Ikosi Isheri LCDA. As you assume your new office, let me remind you that the task ahead requires purposeful and result-oriented leadership that will deepen the relevance of local government administration for the benefit of the good people of Ikosi Isheri LCDA”.

“All the infrastructural projects being executed by this administration fall within the jurisdiction of one local government or the other. To ensure maximum effect and optimum delivery of dividends of democracy to our people, local governments must strive to compliment the State government’s efforts in the areas of construction/maintenance of inner roads, waste management, security of lives and property, primary education/healthcare and so on. We must synergize to deliver a smart city that works for all”.

The governor assured Lagos residents of his administrations drive for a better, safer and smarter state built to its people’s satisfaction, and called for support from all citizens and residents to make help bring the Lagos of their dreams to reality.