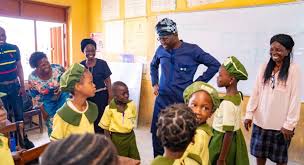 In fulfillment of his campaign promise to boost education standard in Lagos, the State Governor, Babajide Sanwo-Olu, has concluded plans to flag-off school feeding pilot programmes in public primary schools.

The program, which provide opportunities for pupils in public schools to get feed, will commence tomorrow (Monday) with 32 schools on Lagos-Island. And one of the selected schools is St. Paul Anglican Primary School.

To differentiate its program from other states, the State Government tagged it initiative, Snack for thought, a strategy adopted to attract pupils towards understanding reasons for the initiative.

Confirming this to theguild, a senior official in governor’s Office, told our correspondent that during flag off, Sanwo-Olu will share packs to pupils in Nursery and primary one to six.

The source, on Sunday, added that the pilot program will begin tomorrow and run for a week in the selected schools.

According to him, the full program would commence after review of the pilot scheme in the selected schools.

He said: “The essence of the pilot program is to afford the state government opportunity to see what could be added or redefine to aid it success in the state public schools”.

It was gathered that each of the pupils will be handed there pack which contains snacks and drinks to aid easy consumption.