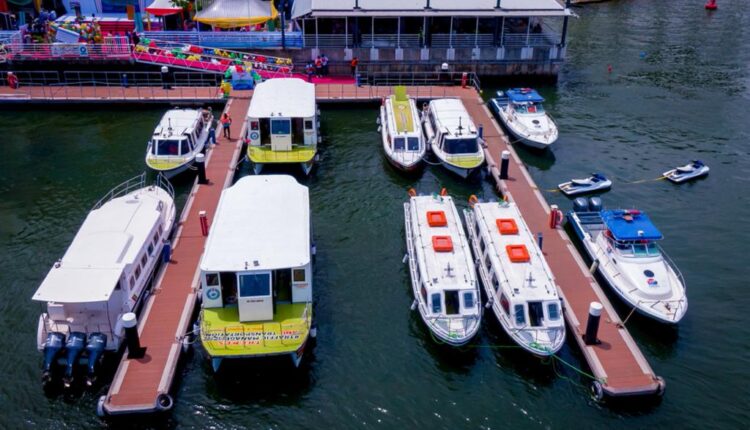 The Lagos State Governor, Babajide Sanwo-Olu, has disclosed that the state government would be paying more attention to waterways transportation to boost tourism and commerce across the state, saying the potentials and benefits that the mode of transportation brings were enormous.

Sanwo-Olu said that the government would be providing additional logistics solutions on waterways to ensure commuters have easy movements and assist business owners seeking to move their trucks as well as cargoes from Apapa and Tin Can Ports through the mode of transportation.

The governor hinted that the government was currently undertaking construction and rehabilitation of 15 jetties across Lagos, as well as embarking on dredging of the lagoon to open up more routes for the Lagos State Ferry Services (LAGFERRY) and other private operators, to increase ridership and goods movement on waterways.

While inviting private investors to join in strengthening waterways infrastructure, he said that the state government has shored up LAGFERRY’s fleet with the addition of high-capacity boats to ensure rapid transit on the waterways.

Sanwo-Olu disclosed the government plans and focus while flagging off operations of seven additional high-capacity speed boats procured for LAGFERRY to enhance their commercial operations and use of Cowry Card for passengers at the Five Cowries Terminal in Falomo, Ikoyi, yesterday.

According to him, the procurement of the new boats was in fulfillment of his Government’s pledge to boost the fleet of LAGFERRY and increase its capacity to transport more Lagosians daily, in order to reduce traffic congestion on roads.

The governor, who was represented at the event by his Deputy, Dr. Obafemi Hamzat, explained that the Cowry Card introduction was to ensure a seamless payment scheme on waterways in line with the State’s multimodal transportation system which includes Bus Rapid Transit (BRT) and the State-owned rail lines, which were coming on board.

He said: “The impressive performance of LAGFERRY within one year is an indication of the growing confidence of the residents in water transportation. This justifies our decision to procure additional boats to enhance LAGFERRY’s operations and capacity to meet the transportation demands of its teeming passengers. The procurement of these new high-capacity boats is in fulfillment of our promise to double the number of boats in the fleet of LAGFERRY and increase its capacity to reduce traffic congestion on our roads.

“We are also launching the Cowry Card for water transportation to create a seamless payment scheme for our Multimodal Transportation System, which is gradually taking shape as we have commenced the integration of our rail lines, bus terminals and waterways. I am pleased to inform you that we are already witnessing positive outcomes from our investment in the safety and viability of our waterways as a safe alternative to road transportation.”

He, meanwhile, said government alone could not be the value provider on the water transportation sector, noting that there were countless economic opportunities that could be explored by private investors when they join in the efforts to strengthen waterways infrastructure.

As gathered, LAGFERRY has moved over 500,000 passengers in the past year with 14 boats it previously acquired. With the additional boats to its fleet, the agency now has improved efficiency and capacity to move close to a million passengers across Lagos waterways yearly.

The Chief Executive Officer (CEO) of LAGFERRY, Abdoulbaq Balogun, said the State-owned operator, which commenced its operations in February 2020, had a mandate to move 30 percent of commuters through the waterways, noting with the addition to the fleet, at least 710 passengers would be ferried per trip.

Since its inception, Balogun said LAGFERRY had not recorded any accident but had raised the standard of ferry operations on the State’s waterways. He said all passengers on the LAGFERRY boats now enjoy insurance cover on all trips.

He said: “After 317 days of operations, LAGFERRY has ferried over 524,000 passengers through the waterways with an increasing daily average passenger flow of over 1,500. A total of 12-seater boats have collectively run 7,061 hours spanning 286,280 kilometers for 10,182 trips.

“The Sanwo-Olu administration is deepening the usage of water transportation with the procurement and activation of seven new boats built by local boat builders. The boats are built to international standards and equipped with modern gadgets, such as wifi, GPS, Echo Sounder, VHF Radio, USB Charging ports, 13amp sockets, television and radio, toolbox, First Aid box, and fire extinguishers.”

Balogun led Dr. Hamzat and members of the State Executive Council on inaugural trips in the new boats after they were officially launched by the Deputy Governor.

The new boats launched include two units of 50-seater and five units of 30-seater, with one utility boat for operational purposes. They will operate on all approved routes for LAGFERRY, and passengers are to use the Cowry Card for payment for the ferry services.