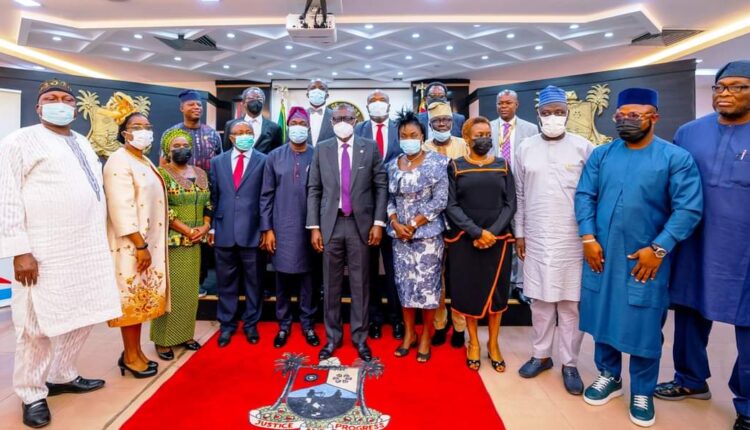 Lagos State Governor, Babajide Sanwo-Olu has inaugurated members of the new Governing Council of Lagos State University (LASU) with a charge that they ensure fairness and strict adherence to relevant laws of the institution’s guide their operations.

He added that it was important for the council members to justify the confidence reposed in them by the State Government by working tirelessly to ensure that the existing peace and industrial harmony in the university was sustained and even improved upon.

Addressing the council members during the inauguration ceremony at the Lagos House, Ikeja, on Thursday, Sanwo-Olu implored them to give top priority to implementation of quality policies and programmes that would accelerate the pace of development and growth of the university to make it rank among the best in the world.

He added that the new governing council was in the recommendation of the LASU Vice-Chancellorship Special Visitation Panel constituted by the state government.

According to him, the inauguration signaled a new chapter of progress and resolution of issues surrounding the appointment of a substantive 9th Vice Chancellor for the university.

He stated that one of the urgent responsibilities before the new council was to immediately activate the process for the appointment of a new VC and that it was important they strictly adhere to due process, extant laws of the school and to be fair to all contenders.

”One of the key responsibilities of the Council which require your urgent attention is the activation of the process for the appointment of a new Vice-Chancellor for the University. In performing this responsibility, I urge you to be guided by the lessons from past events and ensure strict adherence to relevant laws, guidelines, and procedures,” the governor said.

According to him, the visitation panel worked independently for 37 days, including extending invitations to all necessary stakeholders and parties involved in the matter, so as to give room for fair hearing, equity, and transparency.

”One of the recommendations is for the dissolution of the previous Governing Council and the removal of the Pro-Chancellor and Chairman of the Council. Based on the conviction by the State Government that the Panel did a thorough job and the report was not based on biases or sentiments, the report of the panel was upheld and the existing Governing Council was then dissolved accordingly.

”In order not to create a vacuum, it, therefore, becomes imperative that a new Governing Council is put in place to oversee the affairs of the university, in accordance with the Lagos State University Law, Cap L69, Volume 7, Laws of Lagos State, 2015 as amended,” he said.

The governor assured that the other aspect of the panel’s recommendations would be implemented, in line with the relevant provisions of the law and in the overall interest of the students and the public.

He said that before the appointment of the members of the Governing Council, special considerations were given to their pedigrees, competencies, work experience, individual and collective contributions to the development of their states and the country at large.

Sanwo-Olu called on members of the new LASU Governing Council to use their wealth of experience to impact positively the management, policy formulation, and smooth running of the university.

In his acceptance speech, the chairman of the council, Sir David Sunmoni, thanked the state government for the opportunity to serve and assured that the council members would work assiduously to ensure that Lagos State University was moved to the next level.

”It is a call to serve, this is a call to duty, we accept the call. On behalf of my distinguished colleagues, I want to assure you that by the special grace of God, Lagos State University will be a university that all stakeholders and indeed, all of us will be very proud of. We will work diligently, fairly, but firm to ensure that we get the best for the Lagos State University,” he said.