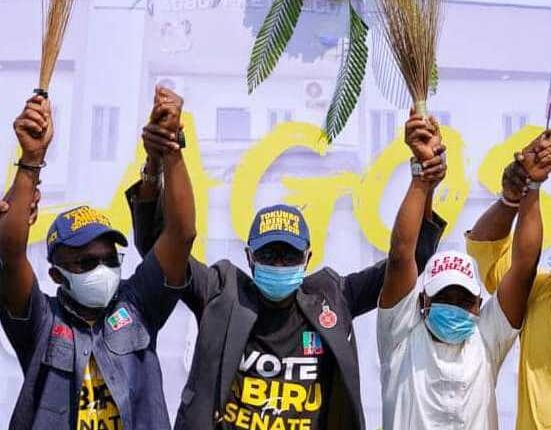 The Lagos State Governor, Babajide Sanwo-Olu, has congratulated the All Progressives Congress (APC) candidates, Mr. Tokunbo Abiru and Obafemi Saheed for their emergence as the Senator and lawmaker-elect for Lagos East Senatorial District and Constituency II respectively.

This is coming as the governor also advised the duo to continue with the tradition of excellent representation that Lagos legislators are known for to ensure the party continues to enjoy massive support from the electorates.

Sanwo-Olu indicated that the APC’s victory with wide margin in the by-elections was a sound testament to the confidence the people of Lagos State reposed in APC.

Through a statement released to newsmen on Sunday by his Chief Press Secretary, Gboyega Akosile, Sanwo-Olu who commended the electorate for coming out to perform their civic responsibilities, also appreciated chieftains of the party and members for working assiduously for the victory during the polls.

“I want to congratulate Mr. Tokunbo Abiru and Obafemi Saheed on their victory in last Saturday’s by-elections in Lagos East Senatorial district and Kosofe State Constituency II polls. Your emergence as federal and state lawmakers is a validation of peoples’ confidence in our dear party, the APC.

“Right from the commencement of the process, we never doubted that Tokunbo Abiru and Obafemi Saheed would win the elections based on their credibility and the massive campaigns in all the nooks and crannies of Kosofe II Constituency and Lagos East Senatorial District.

“The victory of the two candidates of our party in the by-elections clearly showed that APC remains a party to beat in Lagos, based on her achievements in the State since the beginning of the current political dispensation in 1999.”

“The successive administrations in Lagos have put the people at the centre of its action, resulting in several people-oriented programmes. This has continued to manifest in the voting patterns in the State,” he said.

Meanwhile, the state’s House of Assembly, Mudashiru Obasa, while congratulating the duo, said that the party’s victory was a proof that the APC has many more victories ahead.

The Speaker, who had recently declared that Asiwaju Tinubu’s political empire remains solid, intact and victorious, also commended the electorate for ensuring the victory of the party in the two by-elections.

“It is unarguable that his resilience, love for democracy, passion to see his foot-soldiers grow and belief in discipline cannot be measured,” he said.