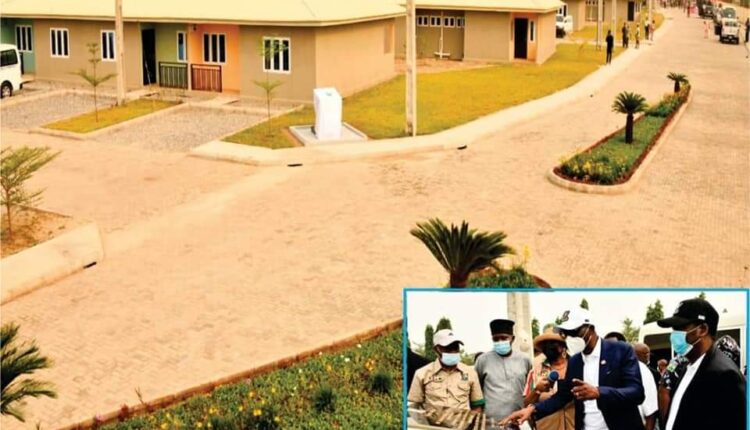 The Lagos State Government, Babajide Sanwo-Olu, has commissioned 252 units of two bedroom housing project in Idale, Badagry axis of Lagos, with a commitment to reduce housing deficit across the state through low-cost housing schemes, among others.

He said the inaugurated projects, and others being embarked on by his administration were aimed at improving Lagosians standards of living which would in turn boost development of human capital.

Sanwo-Olu noted that Badagry, being one of the five traditional divisions of Lagos State was targeted for the development programmes of his administration in line with the T.H.E.M.E.S agenda to entrench access to quality housing units.

Speaking yesterday at the inauguration ceremony, the governor said the projects were part of his administration’s efforts to bring development in Badagry at par with other areas of the State.

According to him, I am delighted to be inaugurating three key projects that will enhance standards of living and boost development of human capital.

Sanwo-Olu said that the State Government acknowledged the effect of affordable housing on the socio-economic wellbeing of the residents, which was why his administration went into a joint partnership with a private investor, Echostone Development Nigeria Ltd, to deliver the 252-unit two-bedroom terrace bungalows for low- and middle-income families.

The housing project was designed with eco-technology and EDGE Advanced protocol, which is a green building certification that making buildings to be more resource-efficient.

Sanwo-Olu said that same technology would be employed to build the proposed Workers’ Village in Ipaja later in the year. This scheme, he said, would provide 600 affordable housing units to workers and their families.

“The 252 units of two-bedroom terrace bungalows being commissioned today incontrovertibly proved our sincerity about closing the housing deficit and delivering our housing promises through relationship we have cultivated with the private sector for housing development. This Idale-Whedako Scheme is indeed a direct result of our faith in the capacity of the private sector to play a supportive role in housing development.

“This housing scheme has come with the lowest of prices, which makes it affordable to the targeted population. The payment plan will be spread over a longer period of time. I thank our development partner, Echostone Development Nigeria Ltd, for supporting the State Government in this regard.”

The state’s Commissioner for Housing, Hon. Moruf Akinderu-Fatai, said that the housing project was uniquely designed and came with the convenience of low cost maintenance in terms of water usage and energy efficiency.