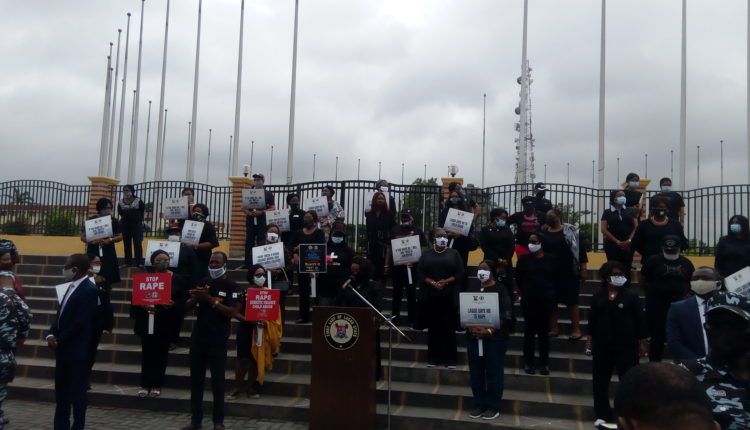 Share
Wife of Lagos State Governor, Dr Ibijoke Sanwo-Olu, has urged Nigerian men to embark on a nationwide solidarity march against rape, sexual and gender-based violence that replicate ongoing anti-racism protest in United States and other countries.
Sanwo-Olu added that replicating action in the country would send a strong message to perpetrators of sexual and gender-based violence to desist from the act immediately.

The wife of the governor made the suggestion while receiving participants at a special All-Male awareness walk organized by the Lagos State Domestic and Sexual Violence Response Team (DSVRT) in collaboration with Partnership For Justice and Mirabel Centre against rape in Alausa.

She stated that sexual violence against women and girls must be accorded the same level of seriousness with which Covid-19 pandemic was addressed to demonstrate the commitment to end the menace.

Sanwo-Olu, who commended men of good conscience that have decided to rise up to be counted for a good cause by participating in the awareness campaign aimed at highlighting the importance of men to join the fight against sexual and gender-based violence.
According to her, “It is laudable to see men come out to send a strong message against rape and ending sexual and gender-based violence in Lagos State. I am very happy that we are able to do this and I hope this will not be the last time we are going to see men coming out like this.
“I pray by the grace of God when we are going to repeat this event, we will have over 20 million men standing behind us. You know how they caused a movement in America where everybody came out; that is the type of movement we want to see here in Nigeria against rape.”
She said it was utterly disturbing that there had been a spike in the incidents of rape especially during the lockdown necessitated by Covid-19 pandemic, saying that available data from credible institutions confirmed chagrin information about the menace.
“It is sad that while we fight Corona Virus pandemic, an unseen enemy, we are still having to deal with issues of a seen enemy and that is the perpetrators of rape and other forms of violence against women and children.
“According to the 2014 National Survey on Violence Against Children in Nigeria, one in every four women have experienced sexual violence in childhood, with over 70 per cent of them reporting more than one incident. Of the 24.8 per cent of women aged 18 to 24 who have experienced sexual abuse before the age of 18, a dismal 5 per cent sought help, and just 3.5 per cent received any assistance.
“Statistics also show that cases of Sexual and Gender-based violence against children cut across abuses within the home or the community by parents, male and female relatives, guardians, teachers, religious leaders, employers, employees, strangers, landlords, sons of landlords, among others.
“These occurrences cannot be ignored and as a matter of fact and emergency requiring an all-hands on deck approach especially as it can be fatal in some situations and as mentioned by the men that it is an emergency, we should not take the issue of rape for granted. As we treated Covid-19 where we opened emergency isolation centres, I think this needs to draw that kind of emergency centres too,” she said.
Speaking on the recent incidents of rape of a two-year-old girl and an 18-year-old lady in the State, the First Lady said it was unfortunate that such happened, saying while the state government had swiftly moved to take custody of the minor and given the victims’ medical treatment and necessary care, every effort must be made by relevant agencies of government to ensure that justice is served to perpetrators of such heinous crime not only in Lagos but across the country.
She said the position of the State Government was clear on issues of rape, adding that Governor Babajide Sanwo-Olu had declared zero tolerance on all forms of Sexual and Gender-based Violence and that it was gratifying that the Governor earlier in the year received an award as a champion for the “HeForShe” campaign, a United Nations initiative launched recently in the State.
Going forward, the First Lady said her Office in collaboration with relevant stakeholders and agencies of government would soon launch a massive campaign against rape and sexual violence, while a World Press Conference would be addressed to roll out other initiatives aimed at combating the scourge in the State.