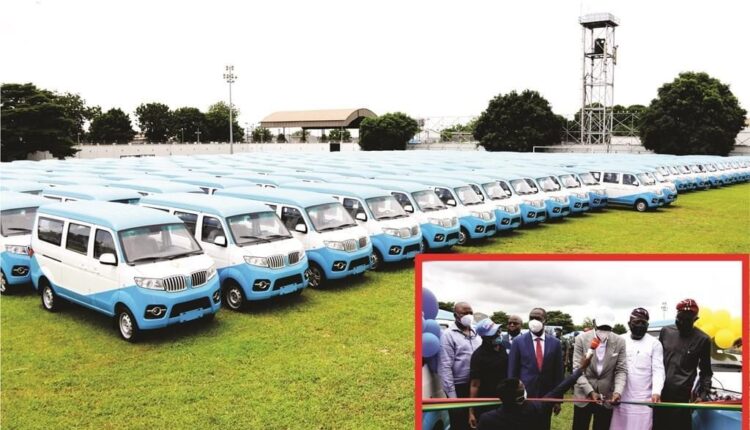 The Lagos State Governor, Babajide Sanwo-Olu, has rolled out 500 units of the First and Last Mile (FLM) Cashless Bus Scheme to replace the Commercial motorcyclists popularly called Okada riders plying in the state.

Sanwo-Olu said that the introduction of the FLM bus said to be a seven-seater mini-bus would be used to phase out the Okada operators in the state.

He stressed that the mini-busses would address Okada-related crises that had generated widespread concern on safety among residents, adding that they would offer services which the high-capacity buses were not designed for.

Aside from the commissioning, the governor, at the State House, Ikeja, on Tuesday, unveiled 300 FLM buses out of the expected 5,000 buses in the first phase.

Sanwo-Olu said the FLM bus scheme is an initiative transport option that gives commuters in the communities outside the main transit corridor a wider berth in accessing transport routes.

“The first and Last mile bus scheme which are small capacity (7-11) passenger buses which will travel on routes designed to take you closest to and from your origin and destination.

“The implementation of the First and Last Mile Bus Scheme followed the restriction of the operations of tricycles and motorcycles in six local government areas and nine local council development areas.

“FLM scheme will be run by private operators who will work with the state. For participation in the bus scheme, the State Government shall support private operators in the Bus acquisition under a Bus Finance Scheme.

According to him, under the first phase, the First and Last Mile Buses, a Community bases routes initiative, will carry between seven and eleven passengers to ply routes in five zones out of the eight in which Lagos has been divided into including, Surulere/Aguda, Yaba/Shomolu/ Ojodu Berger, Lagos Island/ Eti Osa Local Government Area/ Victoria Island Iru, LCDA, Iyana Ipaja/Agege/ Ogba, and Ikorodu.

The governor further said the buses locally assembled in the state would have a cashless payment system with the use of Lagos State Cowry Travel Card, adding that the drivers would be truly certified by the Lagos State Drivers Institute and a Monitoring Mobile App has been designed for real-time data collection, Vehicle tracking devices and would be color-coded according to Zones for ease of identification and monitoring.

Sanwo-Olu added that his administration would observe the operation of the FLM for two months to see if it met the needed demand before he would pronounce total ban on okada riding.