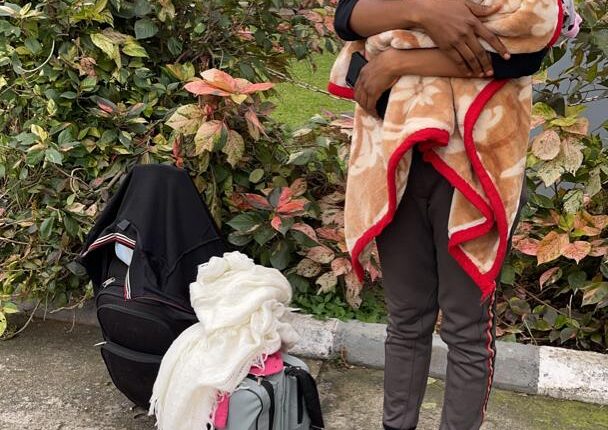 The Lagos State Governor, Babajide Sanwo-Olu, has rescued a three-week-old baby, the mother, and over 60 other students from Lagos currently studying at the University of Jos (UNIJOS), following the recent attacks in Plateau State that had resulted in the murder of over 30 people in the state.

The baby, Daniela, was said to have been delivered shortly before the crisis by the mother, Manya Banfe, a 200-Level student, that was also rescued alongside others from the crisis zone in the state.

Daniela, the mother, and other students arrived in Lagos State on Friday after they were rescued from Jos North Local Government by the governor to prevent them from been harmed by gunmen and irate youths that were already attacking innocent residents within Plateau.

The three-week-old baby and the rescued students including her mother arrived at the Alausa Secretariat, Ikeja at about 2 pm and were received by the State Government representatives led by Commissioner for Information and Strategy, Gbenga Omotoso, the Senior Special Assistant to the Governor on Tertiary Education, Youth, and Student Relations, Omotayo Sanyaolu, and others.

At the reception organised by the State Government to welcome back into the state, the returnees were observed to have been exhausted after going through over 15 hours journey, driving through the roads from Jos, Federal Capital to Lagos.

Narrating her ordeal, Banfe, the nursing mother, stated that she became relieved after leaving Jos with the baby, saying I cannot explain what we went through in that state.

She noted that the experience would have been more terrible but for the intervention of some Plateau indigenes that assisted her in caring for her daughter.

Other students also expressed their appreciation to the Lagos State Government for coming to their rescue and rescuing them from the crisis zone in the state.

Receiving the students, Omotoso said that the government acted swiftly immediately it heard that some students of the state were stranded in Jos and they risked been attacked.

“We are happy that we never got to hear of any loss of lives among our students. We all know what it means to evacuate people. When you guys were coming from Jos and being briefed about the journey, we were praying for you to arrive safely.

“We thanked those who made it happen. It shows the government of Babajide Sanwo-Olu has the capacity to respond to any emergency at any point in time. He had always been saying that the future belonged to the young people.

“When we got news of what was going on in Jos, it was in his mind that no Lagosians should suffer there. The lesson of this, is that wherever we are, we are ambassadors of our families and the state government. The government is excited that we did not lose any one of you,” Omotoso said.

He urged the students to abide by COVID-19 safety protocols as they were now in Lagos and that they should ensure that they studied their books while waiting for the school to be re-opened when the crisis abated.

The Permanent Secretary, Office of the Special Adviser on Education, Kasali Adeniran, who represented the Special Adviser on Education, Tokunbo Wahab, noted that the state government’s immediate response to their requests for evacuation was a demonstration of the Sanwo-Olu’s administration to security and good governance in line with the letter ‘S’ of the THEMES Developmental agenda.