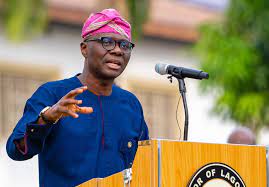 The Lagos State Governor, Babajide Olusola Sanwo-Olu, has approved five years tenure renewal for Executive Chairman of  Lagos State Internal Revenue Service (LIRS), Hamzat Subair, whose stay in office would have ended in 2021 on concluding first tenure appointment that led him into the state’s revenue agency during last quarter of 2016.

From tenure renewal, Subair had secured himself another five years in office that would only be coming to end in 2027 except otherwise, if not resignation or appointment termination.

Besides, just as the governor also extend tenure of members on Special Committee on Rehabilitation of Schools (SCRPS), Lagos State Christian and Muslim Pilgrims Welfare Boards too received new chairmen and members who were expected to take over old members upon their tenures’ expirations and run religious affairs for the state.

Sanwo-Olu indicated that the tenure renewal of LIRS’s chairman and that of SCRPS members became effective in December 2021, while appointments of  Chairmen and members of the state’s Christian and Muslim Pilgrims Welfare Boards took effect from January 1, 2022.

Through a release made available to media on Sunday through office of Head of Service, Lagos State Government, Hakeem Muri-Okunola,  the governor listed Rt. Rev Babatunde C. Akinpelu-Johnson as chairman of Lagos State Christian Pilgrims Welfare Board while other appointed members include Yemisi Adeyemi, R. A. Oguntuase,  Ademola Adeosun, Abiodun Naz-Musa, aside Adeyinka Odugbade would be serving a second term, having served with the immediate past board.

The Sanwo-Olu also indicated that Shakir Gafar would be serving as chairman of the state Muslim Pilgrims Welfare Board alongside Fausat Dabiri Yusuf Ara, Abdul Kadir Paramole, Lola Shonibare, and Mojeed Sanni as appointed members of the board.

According to the state:  All the new board members are expected to serve for a renewable period of three years as provided in the extant laws with the exception of Mrs. Adeyinka Odugbade, who had served a previous tenure of three years under the immediate past Board”.

It said: “We have approved the extension of the tenure of the Special Committee on Rehabilitation of Public Schools (SCRPS), a special purpose vehicle resuscitated by the present administration to achieve rapid and focused rehabilitation of Public Primary and Secondary Schools across Lagos as well as the provision of new school furniture and laboratory equipment.

“Accordingly, the Committee Chairman, Hakeem Smith, a foremost Quantity Surveyor and former Chairman, Association of Consulting Surveyors of Nigeria, has been reappointed along with other Committee members” he said.

“Other members of the Committee are: Babatunde Ishola Raj-Label; Yetunde Holloway; Adebanjo Olusegun Adedaramola; and Gbemisola Khadijah Legunsen (Board Secretary).

“All the appointments were in accordance with the relevant State laws and expected to add impetus to the implementation of Government policies within the respective jurisdictions”, he said.

Meanwhile, the head of service expressed confidence in abilities of the appointees to discharge their duties creditably, just as he urged them to justify the confidence reposed by Governor Sanwo-Olu.