Olusanya’s promotion was coming barely a week the former commissioner tendered his resignation as cabinet member to Lagos state governor to pursue a life time service as Oniru new King-elect that of which he received the staff of office yesterday. 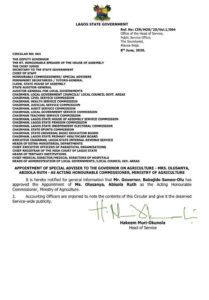 Through a circular issued on Monday by Head of Service to Lagos State Government, Hakeem Muri-Okunola, the governor confirmed the promotion of the special adviser  and that she was expected to begin acting as commissioner to the ministry of agriculture to carry on Lagos state government’s programs  where Lawal had stopped.

It said: “It is to notify for general information that Sanwo-Olu has approved the appointment of Olusanya as the acting commissioner of for ministry of agriculture.

“The Lagos State Governor has appointed his Special Adviser on Agriculture  as acting commissioner to ministry of agriculture and accounting officers are enjoin to note content of the circular and give it deserve service-wide publicly.

Although, effort by The Guild to speak to the newly promoted acting commissioner to ministry of agriculture proved abortive as she was not available to comment on her new office.