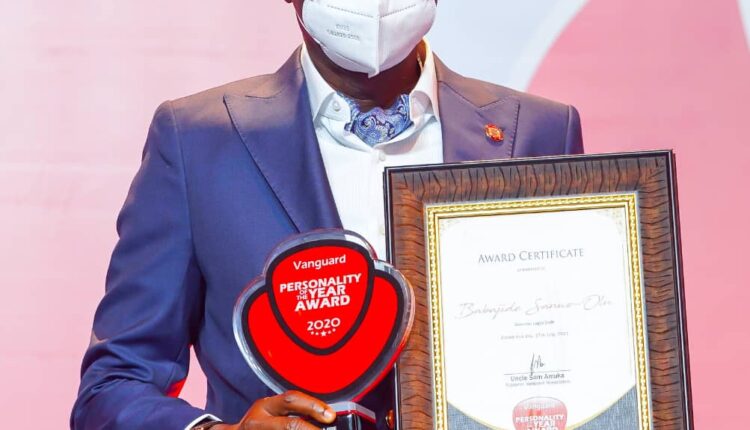 The Lagos State Governor, Babajide Sanwo-Olu, has bagged the prestigious Vanguard Personality of the Year Award for his leadership qualities and efficient management of coronavirus pandemic among others, with a promise to step up his developmental pace and ensure Lagosians enjoy more dividends of democracy through good and responsive governance.

He stated that the award would spur him into coming up with workable policies that would ensure Lagosians experienced all benefits that come with Mega-City status of the state and that he would step up infrastructural development and improve on all positive indices that make Lagos stand out among its contemporaries.

The governor noted that he would strive in achieving more across all sectors in line with his THEMES agenda and ensure successive governments make reference to his developmental stride through yardstick of its impact on Lagosians irrespective of religious, ethnic, and political affiliations.

Sanwo-Olu, who spoke shortly after receiving the award which combined winners for years 2019 and 2020 and jointly won with Borno State Governor, Babagana zulum, at the Eko Hotel, said that the recognition meant a lot to him as it would constantly remind him and his team to work harder for Lagosians.

He said: “I feel highly honored to receive the Vanguard Personality 2019/2020 by the Vanguard Newspapers Group. The awards mean a lot to me. This prestigious award will be a constant reminder to me and my team to perform better to outdo ourselves in the current year for efficient service delivery to the good people of Lagos State.”

Dedicating the award to Lagosians, Sanwo-Olu reiterated his administration’s commitment to achieving the Greater Lagos vision in line with the THEMES agenda. He also thanked organisers of the award as well as the citizens for believing in the current administration, pledging that the government would not let them down.

“I wish to dedicate the awards to every Lagosian out there for believing in our administration’s vision of a Greater Lagos. We will not relent in our efforts to achieve this and other set goals along with our THEMES agenda.”

“My special thanks go to the Vanguard Newspapers Group for the honour. Again, I thank Lagosians for standing by our government through the many phases since the beginning of the administration. Be assured that our best is yet to come,” Sanwo-Olu said.

Meanwhile, the House of Representatives Speaker, Femi Gbajabiamila, has congratulated Sanwo-Olu for emerging as the Vanguard Newspaper’s Personality of the Year 2019/2020. The lawmaker said he was not surprised at Sanwo-Olu’s choice by the Vanguard Newspaper as the governor’s superlative performance in office speaks for itself.

In a statement by his Special Adviser on Media and Publicity, Lanre Lasisi, the speaker said that Sanwo-Olu would go down as one of the most dedicated and committed leaders Lagos State has ever produced.

Gbajabiamila also congratulated the people of Lagos for having Sanwo-Olu as their governor at this time and thanked the Vanguard Newspaper for giving honour to whom it is due. The speaker said that he believed the award would spur the governor to do more for Lagosians.