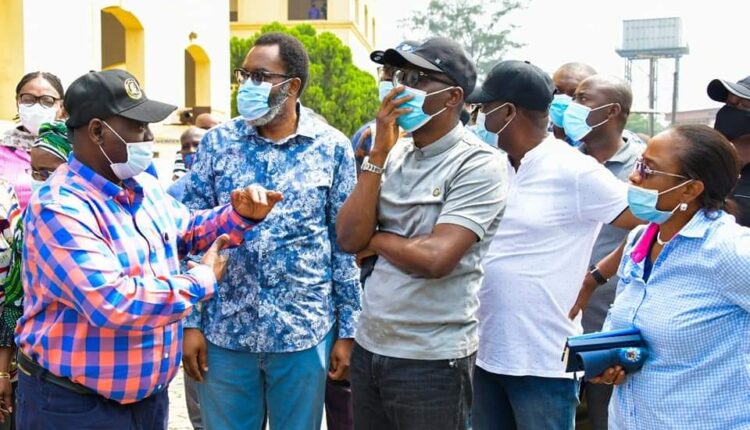 The Lagos State Governor, Babajide Sanwo-Olu has pledged to transform the infrastructure of the judiciary sector of the state for efficient justice delivery.

He said that the move had become imperative in line with his administration’s commitment toward reforming the judicial sector and that the government would stop at nothing in using resources at its disposal to change the face of court rooms across the state.

Sanwo-Olu noted that the move was aimed at ensuring that adjudication no longer take place in an unconducive environment, but a place beffiting of such process to allow better dispensation of justice.

Speaking during an inspection of Lagos High Court, Ikeja and Lagos High Court, Igbosere, the governor noted that there would be total transformation of court rooms, buildings and other facilities for speedy dispensation of justice.

He said that the judicial officials, such as judges, lawyers and other workers in the court should operate in an ambiance environment for smooth justice delivery.

Sanwo-Olu said that his administration would continue to deliver dividends of democracy to the people of Lagos State, adding that the judiciary arm would not be left out.

He said the Lagos State Government would set up a joint committee between the judiciary and executive to work toward putting in place a rebranded and renewed physical infrastructure in the judiciary in the week, month and years ahead.

”The whole objective of the exercise (inspection to the courts) is for all us to continue our collaboration between executive and judiciary, understanding fully-well that we are all set up to serve our citizens.

”And the only way we can serve is to ensure that all of us have the right ambience and have the right environment for that service to continue to happen.

”Lagos State judiciary is prized as the foremost judiciary service in the country, not only with the number of judges that we have but the number of caliber of our judges.

”Beyond that, is also to look at both the physical infrastructure and welfare of our judges,” the governor said.

He said that as the infrastructure reformation begin, there would be a bit of displacement and inconveniences.

Sanwo-Olu pleaded with plaintiffs and complainants that come around the court premises, to understand and bear with the inconveniences of scaling up the physical infrastructure of the courts.

”The press should help push out the communication effectively so that the public will know that it is for a better service.

“At the end of the day, the people who come to use our court rooms must also have a feel of the new and refreshing atmosphere.

”We will also be seeing a rebranded, renewed physical infrastructure in the judiciary in the week, month and years ahead,” he said.

The governor was accompanied on the visit by his deputy, Dr Obafemi Hamzat; the Secretary to the Government of Lagos State, Mrs Folashade Jaji; and the Chief Justice of Lagos State, Justice Kazeem Alogba, among others.

One dies, two suffers burn during tanker explosion in Lagos