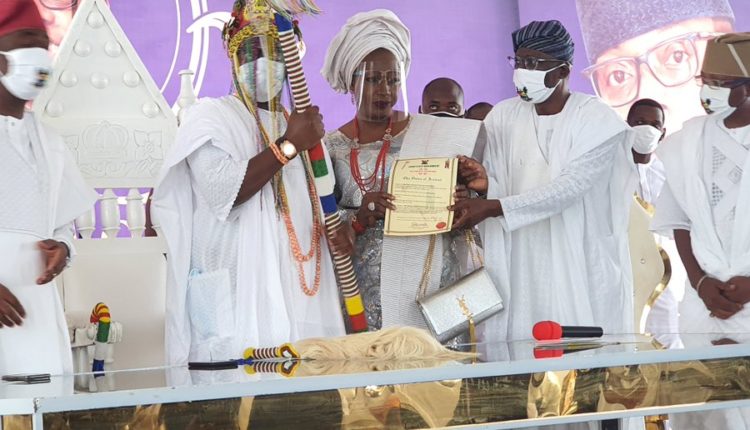 Share
The Lagos State Governor, Babajide Sanwo-Olu, has presented staff of office to the 15th Oniru of Iru kingdom, Oba Gbolahan Lawal  and charged him to sustain the peace and harmonious relationship that had existed in the land.
Lawal received the staff of office barely three days after the Kingmakers and elders of Iruland selected him among the lists of prince vying for the throne that became vacate last year after the 14th Oniru, Oba Idowu Oniru, joined his ancestors.
At the ceremony held within the kingdom on Sunday, the governor, who described traditional institution as the first systems of governance, stated that it would forever remain a strong link to Nigeria’s heritage at all times.
“Our traditional rulers are playing very strategic roles in contemporary society, not only as symbols and custodians of our traditions and cultures, but also as rallying points for all of society; agents of stability and development”, he added.
Sanwo-Olu stated that due to this importance, his administration would continue to support every monarch in the state to realize their vision for the land.
“Your Royal Highness, I pledge the full support of the State Government towards the realization of your vision for Iru Kingdom. It is heartwarming to see how the Kingdom has grown in leaps and bounds in the last few decades, rising to become one of the economic nerve-centers of Lagos State.
“Our administration will continue to accord this part of the State, like all others, the attention you deserve, in terms of infrastructure, economic empowerment, human capital development, and security.
“There is no doubt that the future of Iru Kingdom continues to be bright and promising, and that the ascension today of His Royal Majesty, Oba Abdul-Wasiu Omogbolahan Lawal, Abisogun II, marks the start of the next phase of the journey into that future”, the governor said.
After assuring the traditional institution of his unflinching support, Sanwo-Olu task the monarchs including Lawal to sustain the development in their kingdoms
“I enjoin His Royal Majesty to build on this foundation. There is no better way to ascend to this worthy throne than in this atmosphere of goodwill and harmony.
“As the father of all of Iruland, you have an important responsibility to strengthen the existing bonds of unity for the overall development, peace and progress of this historic kingdom”.