Gunmen kill over 15 villagers during attacks across Zamfara

Just In: Police arrests Mr. Macaroni, over 10 other Occupy… 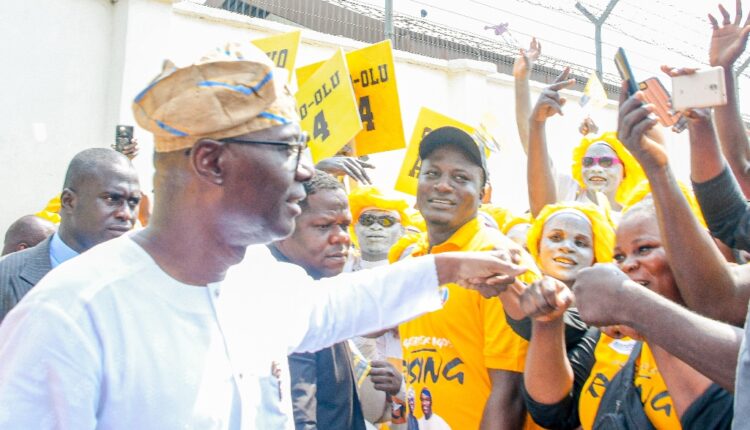 Ahead of the 2023 gubernatorial election in Lagos, the State Governor, Babajide Sanwo-Olu, has kicked off his re-election ambition with a display of his achievements recorded since his assumption of office in 2019.

As gathered, the governor alongside his deputy, Dr. Obafemi Hamzat, has taken all available advert space to showcase his scorecard with a campaign slogan ‘A Greater Lagos Rising’, before the upcoming election in the state.

Some of the brands activated by the governor to showcase his works and promise a better state included digital banners, A-Frames, static billboards, digital billboards, gantries, and branded Bus Rapid Transit (BRT) buses.

The campaign kick-off was confirmed during a media parley held on Wednesday in Ikeja, the state capital, with some members of his Executive Council taking turns to explain what the government had done to improve infrastructures and boost the standard of living of Lagosians.

Addressing pressmen at the media parley, Commissioner for Information and Strategy, Gbenga Omotoso, said that the campaign was designed to communicate to all residents what the government had done with their taxes and time.

Omotosho added that the Lagosians, irrespective of their status, would get to see and understand the message this administration has done and plans for the next four years when elected during the 2023 election.

While giving an overview of the campaign, the commissioner stressed that everyone that designed the campaign was Lagosians and all materials used for the design were sourced locally to ensure that the economy experience better growth.

He said: “We promised our people A Greater Lagos. What do we see around us? Abundant evidence of a new city rising from the womb of time. We do not make a false claim of having reached the zenith of our journey. Our contextual usage of the word is as an adjective that suggests an upward swing, an increase, and an upward movement. These are the signs Lagosians can see all around the state.

“From the social motivational perspective, the idea of rising captures the essentialism of the spirit of thousands of ‘creative and tech rebels’ who call Lagos home, and who are changing the false narratives about Nigeria with music, movies, fashion, sports, and technological innovations. They are the heroic souls putting Lagos on the global map. They are the ones helping to announce the rising of our city on distant shores. They are the Made-In-Lagos brands to whom this campaign is also dedicated.

“Mr Babajide Sanwo-Olu has himself given this dedication the finest expressions in a TV commercial and two theme songs that will be released across traditional and social media platforms in the course of this campaign. All of our campaign assets capture the place of the audacity of the Spirit of Lagos in the rising of the City. The campaign assets are not some forms of self-adulation, but fitting credit to the contributions of Lagosians, especially the youths, to the height Lagos has attained today. This campaign is not about Mr. Sanwo-Olu and his team alone, it is a tribute to all our youths who are putting Lagos on the global map. This campaign is a celebration of the collective progress we have made in the last three and half years – against all odds. It is also a vivid reflection of what to expect in the coming days.”

“Our campaign theme has been rendered in a font known as Chalkboard. This font captures the unique dynamic spirit of the everyday Lagosian. Rendered in a brush-stroke style, it is clearly drawn by humans, not a machine. It is not the commonplace font often used for political campaigns in this clime. It typifies the animating energy, remarkable audacity, and unbroken resilience of our people. These are qualities embedded in the spirit of Mr Babajide Sanwo-Olu, his deputy, and the cabinet in envisioning the scale of the ongoing transformation projects being delivered across Lagos. These are also the qualities engrained in the DNA of every true Lagosian.

“Let me remind us all of this truth – rising is the proof of doing. Rising moves us from our initial statement of intent, ‘For A Greater Lagos’, to ‘A city that is rising and transforming before our very eyes’. When we say a greater Lagos, we are drawing the attention of citizens to the positive changes taking place all over Lagos. We are making an affirmative statement about the growth of our economy, the breathtaking rebuilding of Lagos, and the fresh hope of citizens following the reopening of the economy after COVID-19. A new chapter in the development of our state just flipped open before our eyes, let’s write a new history. Let’s rise to a new phase of our history as we collectively affirm that a greater Lagos is rising.”