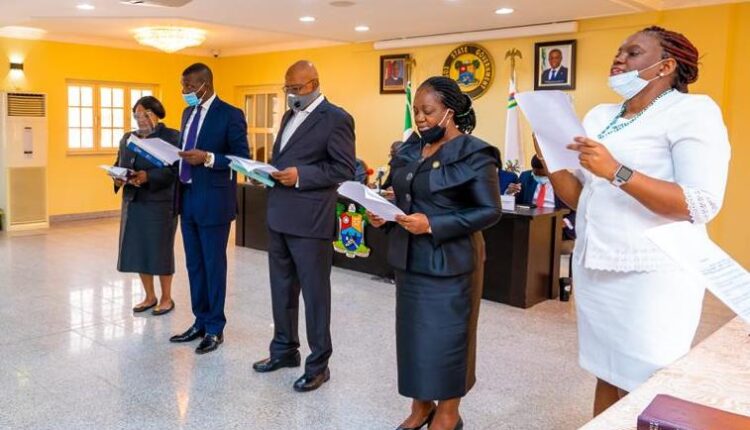 As protests against police brutality intensified across Lagos, the State Governor, Babajide Sanwo-Olu, has inaugurated a Judicial Panel of Inquiry to investigate cases of brutality and human rights violations committed by operatives of the dissolved Special Anti-Robbery Squad (SARS).

Sanwo-Olu said that the inauguration was an indication of the state government’s sincerity towards the quick resolution of issues that led to the nationwide protests against the current policing system.

The governor, who inaugurated the panel at the State House, Marina on Monday, stated that the need to uphold tenets of due process and fair hearing in the course of human rights was why Justice Doris Okuwobi (retd) was appointed as chairman.

Sanwo-Olu noted that the tribunal expected to sit for six months, would evaluate the evidence, and draw conclusions on the validity of public complaints on police brutality and extrajudicial killings in Lagos, with the aim of determining and recommending compensation for victims and their dependents.

According to him, the tribunal will interrogate SARS officers responsible for the abuse of victims and recommend their prosecution in accordance with the constitution.

He said: “In the last two weeks, we have witnessed pockets of justified protests by our youth against police brutality. The pain of our young ones has been felt in various parts of Lagos and country as well as in the diaspora. The protesters have spoken in one voice against the unbridled violation of fundamental rights and lives by the disbanded SARS operatives.

“In my engagements with the protesters, they handed me a list of five immediate demands, which I personally presented to President Muhammadu Buhari last Tuesday. Before then, I had taken action on some of their demands, which included the immediate release of all those detained on account of their participation in the EndSARS protests and the raising of N200 million victims fund for compensation to families and individuals who were victimised by officers of the disbanded SARS.

“In response to one of the demands of our youth and in line with the resolution of the National Economic Council on October 15, 2020, chaired by the Vice President, Prof Yemi Osinbajo, the Lagos State Government has constituted a Judicial Panel of Inquiry and Restitution under the chairmanship of a retired Judge of the Lagos High Court, Justice Doris Okuwobi. We assure all victims that justice will be served.”

Sanwo-Olu said the panel took its legitimacy from Section 5 of Tribunals of Inquiry Law, Laws of Lagos State, 2015, stressing that the panel had powers to procure evidence and summon any person to attend its proceedings to give evidence or produce any document or other thing in the person’s possession.

The Governor said: “Mindful that complaints may be against serving police officers or ones already dismissed, the tribunal has a mandate to carry out the directives of the Federal Government to enable it discharge its duties without fear. We expect the panel to judiciously use its powers to ensure that all necessary parties appear before it to testify: the members of the panel have the mandate to ensure that the rule of law prevails.

“I thank the chairman and members of the Judicial Panel for responding to the call of duty at this crucial time. I am convinced that you all recognise the importance of the assignment, which I believe will open a new chapter in police-citizen relationship. I urge you to approach this task with all sense of responsibility even as Lagos residents look to you for a fair and just outcome.”

Sanwo-Olu promised the State Government would not wait till six months – the period set for the tribunal to sit – before compensating victims as may be recommended by the judicial panel.

He also pledged that the Government would comply with and support the manner in which the tribunal members may decide to hold their proceedings.

Responding, Okuwobi said the EndSARS protests had proven formidable to elicit positive actions to re-awaken consciousness of the Government on the need to address injustice meted out to members of the public by SARS operatives.

She said: “Having been invited to serve on this panel, we view our appointment as scared, demanding our utmost commitment, passion, loyalty and sense of duty in the discharge this assignment.

“No stone will be left unturned. We shall be thorough, objective, and transparent in line with the terms of reference and enabling legal instruments. As thorough-bred professionals and legal experts, we remain true to our calling and will ensure that victims of this loathsome abuse and brutality are identified with the society and recommended for due compensation.”