JUST IN: APC ex-spokesperson educates Adegboruwa, others on… 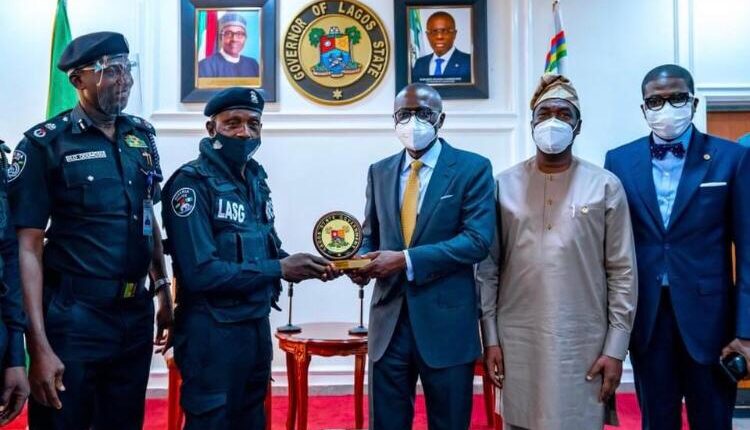 In appreciating a police officer’s action towards an assault against him, Lagos State Governor, Babajide Sanwo-Olu, has honored an Assistant Superintendent of Police (ASP), Sunday Erhabor, for displaying a high level of professionalism, composure, and self-restraint in the face of provocation.

The police officer, attached to the Rapid Response Squad (RRS), was recently assaulted by a traffic violator, identified as Victor Ebhomenyen, who drove against traffic law around Oniru, in Victoria Island axis of the state.

Sanwo-Olu hailed the cop,  for restraining himself from taking laws into his hands, despite being violently assaulted while trying to arrest Ebhomenyen for driving against the traffic.

Sanwo-Olu, while commending the officer at the Lagos House, Ikeja on Monday, described the action of the officer as a testimonial and encouragement for other officers to show that they can be civil in the face of provocation or assault from suspected criminals.

“This is our own little response to the very condemnable events that happened over the weekend. “We are all very quick to condemn men of the Nigeria police, especially when they are found wanting. We are always very quick to also admonish them.
“But the event that we all saw over the weekend showed that indeed there are some very commendable police officers. ”In the real heat of provocation, ASP Erhabor displayed a high quality of restraint. He displayed calmness and restrained himself from taking laws into his hands.”And I think for that little gesture, it is important for us to bring him out so that we also can use him as a testimonial and encouragement for other police officers to show that indeed, they can be civil and that police are meant to protect citizens,” Sanwo-Olu said.

According to Sanwo-Olu,  police officers are meant to also be law-abiding and the likes of Erhabor could be a source of encouragement to other officers.

”On behalf of the government and the entire people of Lagos state through the commissioner of police, I want to commend Erhabor for a show of patience, decorum, and what is expected of a police officer.

”I want to implore other police officers to see that indeed, there are times when you may be provoked, restraint is the word and see it that there are some members of the general public that can be very violent, please restrain and let the normal cause of law take its course.

”I want to use this medium to thank him and give him a governorship handshake or elbow shake as the case may be as a source of encouragement for him,” he said.

Sanwo-Olu, however, urged the Commander of RRS, Chairman of Task Force, the Chief Security Officer, and everybody information to use Erhabor as a good case for others.

Speaking earlier, Odumosu said that Erhabor displayed a high level of diligence and civil-oriented professionalism expected in modern policing, as advocated by the present Inspector-General of Police, Usman Alkali Baba.