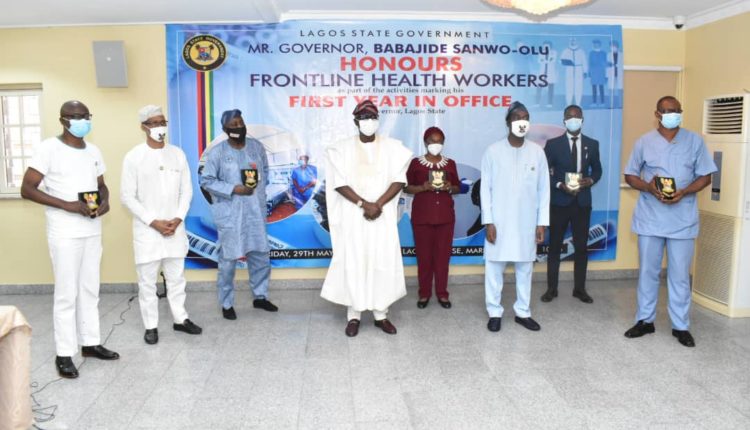 In appreciating their efforts and total commitment to the fight against coronavirus, Lagos State Governor, Babajide Sanwo-Olu, has honoured a gateman, Tajudeen Bankole, alongside nine other coronavirus frontline health workers for their dedication towards gaining control against the pandemic.

He explained that the gesture had become imperative in appreciating the unquantified sacrifices of the frontline health workers who were at the forefront of the state’s fight against following the index case of the viral infections in the country.

According to his, the frontline health workers dedication and the state’s health response hallmarked success of his administration for the year, adding that workers heroic deserves special recognition and honour.

“Dear brothers and sisters, we hold you dearly and profoundly appreciate your selfless service to the State and the good people of Lagos. This is our modest way of saying thank you for your sacrificial service, this is our little way of expressing our heartfelt gratitude to you; you deserve this and more.

“We sincerely hope you will even be further motivated to renew your resolve to fight this pandemic with renewed vigour and commitment”, the governor said,” he said.

He, however, urged them to redouble their efforts towards winning the war against the pandemic in the state, saying “we are still very much in the battlefront, but we are assured of a resounding victory with the unflinching support of our noble frontline health workers and everyone in the State.”

Sanwo-Olu noted that the honoured health workers represent the various pillars of the Emergency Operation Centre of the state health response.