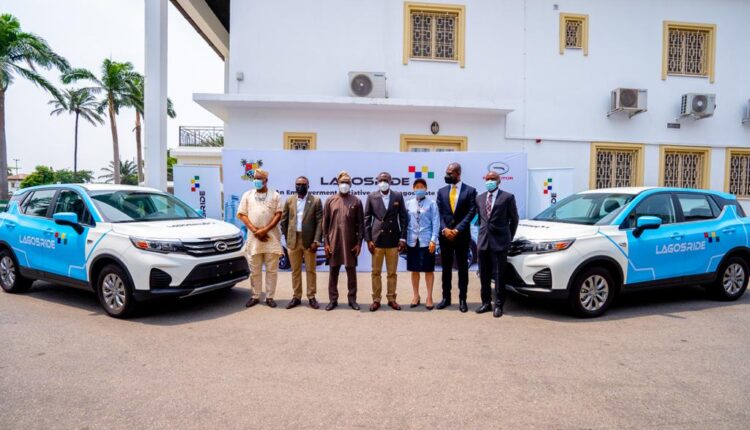 In a move that may signal an end to the operations of the international hailing cab companies like Uber, Taxify and others in the state, the Lagos State Governor Babajide Sanwo-Olu has launched a new indigenous cab hailing company, the Lagos State Taxi Scheme, with an initial seed of 1000 taxi cabs.

It would be recalled, The Guild had reported in August last year, that the Lagos State Government had such plans in the pipeline. The reports read: “Indigenous electronic-hailing operators may hijack an already made e-taxi market services from an international operator, Uber, should the company fail to comply with Lagos Government’s new regulations designed for operations of the modern taxi system within the state.

“With the new regulations, there is an indication that Uber days of operation in Lagos are numbered, in case the company is not able to find a common ground with the state government on its new order in another few days.”

According to a source, the state  government’s  plans are in two phases:  increase the number of hailing cab services,  and easing out yellow buses out of Lagos roads.

While commissioning the scheme, Lagos Ride,  on Thursday,  Governor Sanwo-Olu reiterated the state government’s commitment to improving the living conditions of residents of the state, saying his government was constantly thinking of new ways to make life better for the people.

Speaking on the new taxi-hailing scheme, Sanwo-Olu said: “The Lagos State Taxi Scheme, is another innovative policy of this administration targeted at making life easier for Lagosians, improving mobility and creating a seamless multi-modal transportation system.

“It is even more heartwarming to note that the Lagos State Taxi Scheme is being inaugurated along with the signing of the agreement for the establishment of a vehicle assembly plant in Lagos State- a project that will create jobs, accelerate socio-economic growth, and further put our state on the global map as the centre of excellence and a modern megacity committed to sustainable development.

“As a people-oriented government, we are constantly on our toes, thinking of ways to make Lagos more habitable for its residents, initiating and implementing ideas to make life better for all Lagosians, and to achieve our dream of a Greater Lagos.”

Sanwo-Olu said a major attribute of a modern megacity is a world-class transportation system with inter-connected services and mobility choices for the citizens, and that his government is committed to bequeathing a safe, efficient, quick, and modern public transportation system to Lagos, a key thrust of his administration’s T.H.E.M.E.S. Agenda.

The governor said the taxi scheme, known as “Lagos Ride”, was a fulfillment of his government’s desire to give Lagosians transportation choices which is a key component’s socio-economic intervention programmes .He spoke further: “Our social intervention programmes are tailored towards the eradication of poverty, provision of jobs and other employment opportunities as well as the provision of basic necessities, that make good governance our people’s reality.

“Under the Lagos State Taxi Service, drivers/operators will be given the cars for a period of four (4) years during which they pay a monthly installment and they will have the opportunity of owning the cars, after they have fully paid the hire amount. The Lagos State Taxi Service is structured along a profitability model, it is self-sustaining and able to expand and regenerate itself.

“Coming up with a name, logo and color for the scheme, we took into consideration our heritage as Lagosians, especially our resilient spirit, our cultural heritage, our strength, vibrancy and independence as well as the marketability of the Lagos State brand.

“This Taxi Scheme Partnership with CIG Motors also includes the establishment of a motor assembly plant, here in Lagos, for the production of different classes of motor vehicles, using complete knockdown (CKD) parts. This is in furtherance of the economic growth agenda of this administration.

“As we commission the taxis and sign the Joint Venture Agreement for the establishment of the motor assembly plant, Lagosians should expect a roll-out of vehicles from this plant within the next 12 to 18 months.

“I urge the beneficiaries of the Lagos State Taxi Service to collaborate with us to sustain the scheme. We have the political and administrative will to ensure the taxi scheme survives- I am hopeful that the operators will cooperate with the Lagos State Government to render excellent service to the people.”

He urged the drivers to treat riders with utmost respect, handle the vehicles with care, respect traffic laws, and avoid any malfeasance while calling on riders to reciprocate the drivers’ respect and help improve and sustain the taxi scheme.