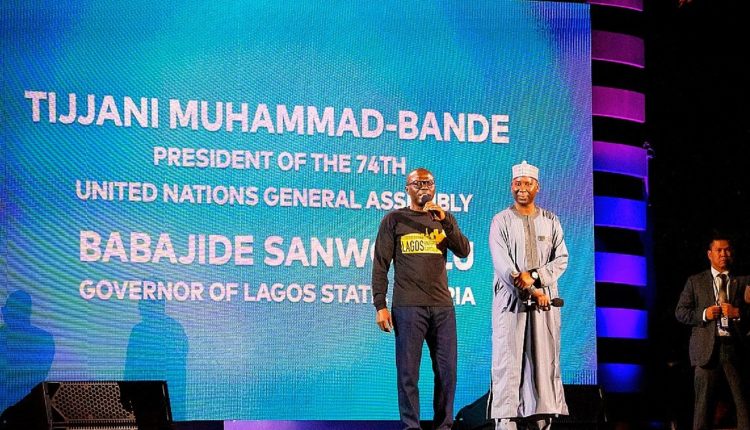 Share
By Olawale Abdul-Fatah
The Lagos State Governor, Babajide Sanwo-Olu, has earmarked $100m (N36 billion), for the eradication of open defecation and improve accessibility to portable water in the state.
Sanwo-Olu further disclosed that the State would be playing host to the Global Citizen Festival next year.
The governor made the announcement during an interactive session of global leaders, activists and entertainers said the need to end extreme poverty by the year 2030, which is the aim the Global Citizen movement be embraced by every leader around the world.
He said: “At the Global Citizen Festival, I pledged $100m to improving water access, sanitation and the eradication of open defecation in Lagos by 2025.
“We are also excited as Lagos will be hosting the world as this iconic event comes here on September 26, 2020,” the governor added.

The Governor said that Nigeria, which has over 200 million people with half of that population living below the poverty line requires concerted efforts by all and sundry to ensure that more people are taken away from extreme poverty on a regular basis.

“I stand before you this evening to join my brothers and sisters from Nigeria to announce to you that come September 26, 2020, we would be hosting the world. We would be hosting the Global Citizen Festival in Lagos, Nigeria. We are looking forward to it. It is the beginning of greater things to happen to us as people from West Africa and indeed the entire African continent.

“I will encourage the Federal Government of Nigeria to invite leaders from countries in Africa and around the world to grace the occasion. And as Governor of one of the 36 states in Nigeria, I will invite my colleagues to come and make commitments on behalf of nearly one hundred million poorest of the poor people in Nigeria so that by the year 2030, we would be writing a different story about the situation of the poor masses in the country,” Sanwo-Olu stated.

Speaking on the event, the CEO of Global Citizen, Hugh Evans, together with the CEO of Teneo, a supporting company, the historic 10 hour global broadcast event spanning five continents will reach every corner of the world.

According to them, the idea is to spread the message in a very loud and well-coordinated manner for every leader across the world to hear and for them to see the urgent need to commit their knowledge and material resources to help the poor.

The year 2019 festival will hold at the central park in New York on Saturday.

Leaders in music and entertainment who have signed on to the perform at the year 2020 Global Citizen Festival in Nigeria include Usher Raymond, Pharell, D’banj, Tiwa Savage, Hold Space, Shawn Mendes among other artistes.

The 10-hour live event will be supported by Lagos State Government in partnership with live Nation and Delivered Production Services, made possible by Messrs Tunde Folawiyo and Aig-imoukhuede who are co-chair of Global Citizen, Nigeria.

Oct 1: The Journey So Far