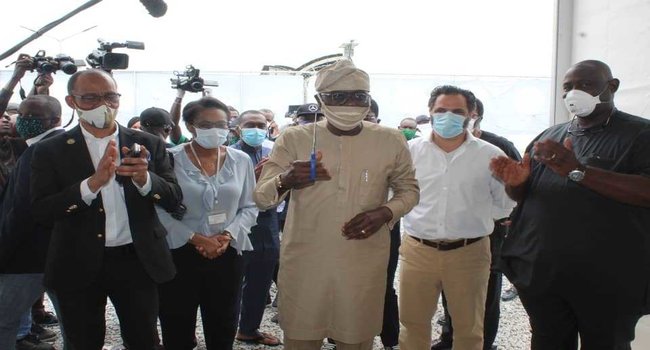 Lagos State Governor, Babajide Sanwo-Olu, has commissioned a seventy-bed coronavirus Isolation and Treatment Center as part of facilities to be used in the government fight against coronavirus, saying the new facility will enhance treatments of coronavirus patients in the state.

He explained that the facility located within the premises of Landmark Exhibition Center in Eti-Osa Local Government Area will enhance the government response during the extension of restriction placed on movement which was meant to identify, trace and isolate all individuals that have come into contact with confirmed cases, ensure treatment of confirmed cases while restricting further spread to other states.

The Governor said the new isolation center which was constructed by the Young President Organization (YPO), Lagos State Chapter, will provide additional capacity to support the already existing isolation facilities in the state, adding that the birth of the facility signifies a working and fruitful collaboration between the public and the private sector.

Speaking at the unveiling of the facility on Wednesday, Sanwo-Olu explained that the ten-bed intensive care isolation unit, four ventilators, monitors, respirators, mobile x-ray, ultrasound, and oxygen dedicated to state government from the facility remains a clear demonstration and commitment of his administration to all-inclusive system of governance.

“What we have seen here today is another demonstration of Private Public Partnership (PPP) collaboration between the State government and a Consortium; the Young President Organization which is peopled by crops of professionals from different fields coming together to fund this laudable project”, the Governor said.

Sanwo-Olu, who commended the YPO for the project, said the facility has been taken over by the State government and will be operated in collaboration with the organization while expressing satisfaction at the level of preparedness of the medical professionals that will man the facility.

He noted that the facility is ready to commence patient admission, saying the state government will stop at nothing in putting the facility to good use for treatments of coronavirus patients

Dignitaries present at the event include the Lagos State Head of Service, Hakeem Muri-Okunola; Commissioner for Information,  Gbenga Omotosho; the Permanent Secretaries in the Ministry of Health, Dr. Olusegun Ogboye and Health Service Commission, Dr. Muyiwa Eniayewun, among others.