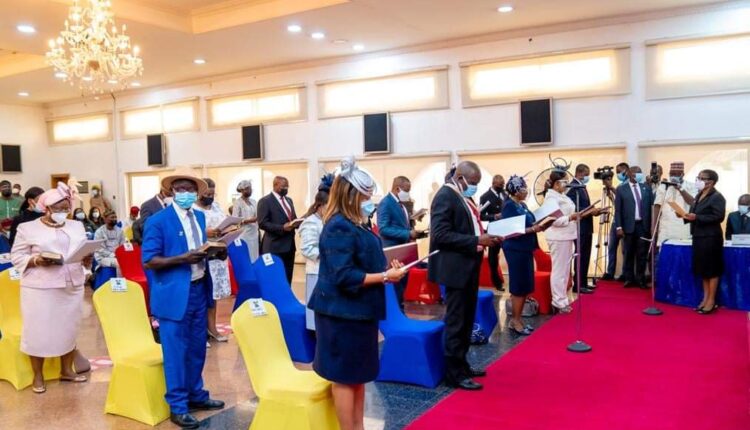 The Lagos State Governor, Babajide Sanwo-Olu, has sworn-in 18 newly appointed Permanent Secretaries with a charge that they ensure right synergy between members of the executive and civil service aimed at achieving quality service delivery.

He said that since the new appointees would be driving the state’s development blueprint, it was important for the those in charge of the civil service affairs to shara a good working relationship with the state’s executive for the betterment of the state.

Sanwo-Olu, who described the Permanent Secretary position as “the engine room” of the Ministries, Departments and Agencies (MDA), noted that the 18 new officers’ roles as administrators remained strategic to the success of his administration.

Speakind during the ceremony on Friday, the governor said that the screening process adopted for the appointment of the permanent secretaries wasintroduced to achieve a merit-based appointment by giving all eligible candidates an equal opportunity to vie for the position based on their knowledge, capacity, competence, and experience.

He added that he personally followed the task of the selecting the new permanent secretaries based on his belief that there must be right synergy between members of the executive and civil service to successfully deliver on the government’s mandate to the people.

The governor charged the new permanent secretaries to justify their appointments by collaborating with his administration to deliver outstanding service to the people.

“The role of permanent secretaries is crucial to the success of any administration. As drivers of the government’s development agenda in the Ministries, Departments and Agencies, we have no choice but to painstakingly embark on a merit-based exercise and appoint only permanent secretaries who share our vision, mission and drive.

“Given our government’s commitment to excellent service delivery, we decided to put in place this competitive screening process for the emergence of new permanent secretaries.

“I, therefore, congratulate the 18 newly sworn-in Permanent Secretaries and commend your contributions to the progress of the Lagos, especially the delivery of excellent Public Service. Your appointment is well-deserved and it is purely merit-based.”

Sanwo-Olu said that Lagosians deserved the best in terms of governance, urging the appointees to give in their best to the service of the State.

He expressed confidence in his administration’s ability to achieve its development programmes, stressing that the vision was hinged on the capacity, commitment and dedication of every member of the government, including the body of permanent secretaries.

“The people of Lagos deserve the best and I demand the best from you. You must always remember that this is not a ceremonial role; to whom much is given, much is expected. As Permanent Secretaries and Accounting Officers of your MDAs, you have the responsibility of optimally managing the human and material resources in your care.

“Let me remind you that our social contract with Lagosians is embodied in the six-point T.H.E.M.E.S agenda, and the faultless implementation of this agenda should guide your actions. You will agree that our MDAs must be headed only by those who share our vision for a Greater Lagos and are ready to work hard to actualise that vision. The path might be rough and the road might not be smooth; indeed, I am convinced we have made the right choices in the appointment of the new Permanent Secretaries.”

The Head of Service, Hakeem Muri-Okunola, congratulated the appointees and expressed his confidence in their qualification for the position.

He urged them to hit the ground running and bring their individual abilities to bear in adding value to the quality of policy development and implementation in the state public service.

Giving acceptance speech on behalf of the appointees, the Permanent Secretary of Primary Healthcare Board, Mustafa Akinwunmi, noted that the new permanent secretaries were chosen among the best.

“We are ready to deploy our experience and expertise to bring your vision of Greater Lagos into the reality,” Dr. Mustafa assured Sanwo-Olu.