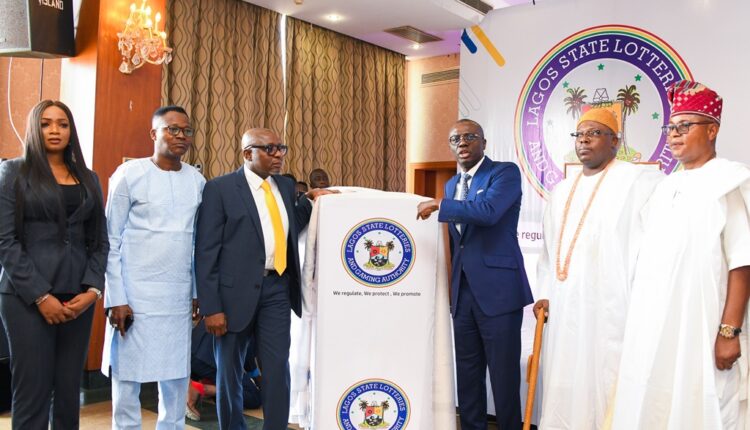 Sanwo-Olu stated that the development was aimed at making the industry fascinating for both investors and operators who had continued contributing to the growth of the system since its establishment in 2004.

The governor noted that through the regulatory body, the state government was committed to ensuring the gaming and lottery business environment become more conducive for all stakeholders’ to get satisfaction on investments.

The governor gave the assurance yesterday while unveiling the new brand identity for the gaming body, Lagos State Lotteries, and Gaming Authority, during an event held in Victoria Island axis and attended by celebrities including the winner of the television reality show, Big Brother NAIJA winner, Hazel Onu popularly called White money.

The governor said that the collaboration with the legislative arm of government to change the identity from Lagos State Lotteries Board to Lagos State Lotteries and Gaming Authority as well as centralizing the entire regulations was part of the desire to ensure the industry in Lagos be at par with others globally.

While assuring stakeholders of modern technological practices going forward, he added that the goal was also to gain and sustain trust as well as maintain the confidence which the operators and stakeholders had in the government since over 17 years ago

The Governor said: “This unveiling ceremony marks a new dawn in the history of lottery and gaming regulation in the Centre of Excellence. The agency has been rebranded to set and enforce gaming standards in a responsible and fair manner. The goal is to gain and sustain the trust and confidence of all operators and stakeholders in the lottery and gaming business.

“Our administration did the needful by painstakingly collaborating with the House of Assembly to initiate and pass the Lagos State Lotteries and Gaming Authority Bill of 2021, which I signed into law last April. The new law will help to institutionalise major reforms in the Lagos gaming sector and expand the scope of our lotteries and gaming authority’s operations in accordance with gaming dynamics across the globe.”

The Governor, meanwhile, allayed the concerns of gaming operators and investors in the industry about the intergovernmental squabbles over the constitutional responsibilities of the Federal and State governments on the control and regulation of the gaming space.

He said the Constitution remained clear on the concurrent powers of the Federal and State governments over matters related to lotteries and gaming, assuring operators that their businesses would not be double-taxed.

Sanwo-Olu advised illegal lottery and gaming operators to obtain operational licenses from the agency, warning that the Government would not hesitate to prosecute any unlicensed operators.

“With this newly rebranded agency, all the functional elements of the lotteries and gaming industry will be unlocked to create a new model of gaming in Lagos State. I charge the management to forge a transparent and formidable alliance with licensed gaming operators in the State, with a view to creating a vibrant Gaming Industry for a more prosperous and sustainable economy,” the Governor said.

The Chief Executive Officer (CEO) of the State’s Lotteries and Gaming Authority, Bashir Are, assured operators that the authority would sustain the protection and promotion of best practices in the gaming space.

He said: “There are more than 56,000 full-time employees and gaming agents operating in Lagos. We have deployed an automated system to monitor gaming transactions in our jurisdiction. We also launched an agent registration platform to weed out swindlers from licensed agents.

“For us, the future has begun and we are excited about the unfolding development in the gaming industry. Our next goal is to focus on creating greater efficiency and sustainable economic value for the State, operators, players, and relevant stakeholders in the sector.”

The CEO hinted that the agency’s advocacy against underage and addictive gambling would be amplified with fortified policy and sustained campaign to protect individuals restricted by law from participating in gaming and lotteries.

Earlier, the Senior Special Assistant to the governor on State Lotteries, Funmi Olotu, stressed that the successful harmonisation of all the State’s gaming regulations had not only corrected disparities in the sector, it also established a uniform framework that would be easily implemented.

According to her, The successful harmonisation of all gaming laws of Lagos State is necessary, not only to correct the disparity in the regulation of gaming activities in the state but to establish uniform gaming law directives that can be implemented by all stakeholders in the sector.

Assuring stakeholders that the law, State Lotteries and Gaming Authority Law of 2021, addresses contemporary and emerging issues that may arise at different times, Olotu stressed that the law has been put in place to suit global best practices.

The unveiling came six months after Sanwo-Olu signed the amended Lagos State Lotteries and Gaming Authority Bill into law, following its passing by the House of Assembly. The legislation necessitated the name change and the new brand logo.