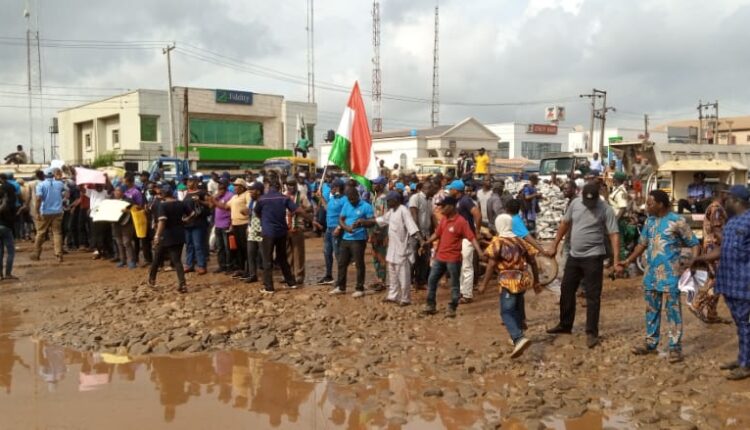 Vehicular movement in and out of Sango-Ota section of Lagos-Abeokuta Expressway in Ogun State has been crippled after the Nigeria Labour Congress (NLC) residents from the area and other neighbouring communities took over the highway to protest against poor road network.

The protesters who thronged the expressway on Wednesday locked down the road and left several road users stranded expressed concerns over the failed portions of the expressway, saying the highway has turned to death trap and sent several Nigerians to their untimely grave.

leading the protest, the labour union noted that the protest followed the expiration of 21 days ultimatum given to the Ogun State Government and the Federal government to fix the deplorable road and ensure Nigerians plying the road enjoy their travelling time on the highway.

The union members and residents who were armed with placards with various inscriptions such as “Dapo repair our roads, it is our right,” “Dapo Abiodun, let us enjoy the dividends of democracy in Ogun”, and “Hear our cries, Ogun people are suffering” among others, said that the demonstration was to express their displeasure over the bad state of the roads.

The protesters, who spoke through Ogun NLC Chairman, Emmanuel Bankole, said that despite revenues been generated by the apex and state governments in the state, both stakeholders have yet to do the needful in terms of road infrastructures across the state, particularly the Lagos-Abeokuta expressway.

This is coming as Bankole also accused the Minister of Works and Housing, Babatunde Fashola, of lying to residents of the state by promising thorough rehabilitation of the road network which was yet to commence.

According to him, 21 days ago, we were here. We gave an ultimatum to the government that we are not pleased with the state of the roads; particularly the Minister of Works coming here to promise that palliative works will commence immediately and several weeks after nothing was done. That was why the 21 days ultimatum was given.

“Interestingly, a few days ago, they started some works. We can see some loads of granites by the State Government. But this is not yet what we asked for. The Minister was here and he promised to commence immediate palliative, which is yet to happen.

“We saw what is in the ground which is the effort of the State Government. The Federal Government cannot be collecting all the money and be inflicting pain on us. That’s why we are here to make the statement loud and clear that Babatunde Raji Fashola, the Ministry of Works and also the FERMA in Ogun State are being declared persona non grata.

“When we leave this place, we are going to the FERMA’s office in Abeokuta and also Ministry of Works to send message to their headquarter in Abuja that we are not pleased with what they are doing,” he said.