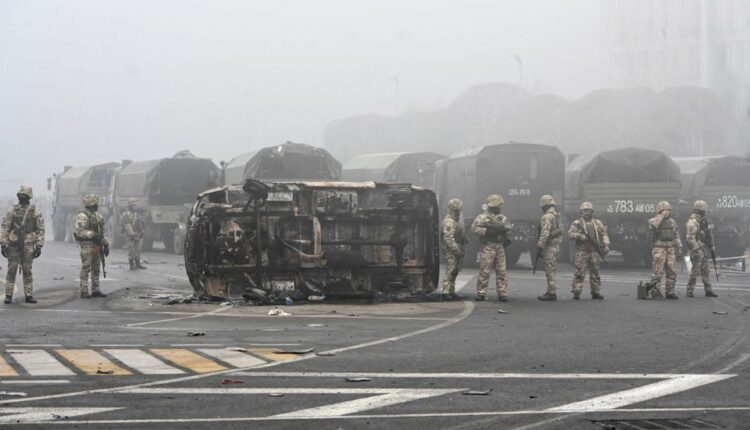 Russia has intervened to stop the ongoing violent protests in Kazakhstan by sending paratroopers as part of an international peacekeeping force to quell the deadly unrest in the central Asian country following President, Kassym-Jomart Tokayev’s appeal.

The cause of the violent protests were sparked by the increase in fuel price which had the people protesting against the government decision and it eventually turned deadly.

Russia responded to the president’s appeal for the intervention of the Collective Security Treaty Organization (CSTO), a military alliance of Russia, Armenia, Belarus, Kazakhstan, Kyrgyzstan, and Tajikistan, blaming foreign-trained “terrorist” gangs for the violent protests.

Several armoured personnel carriers and scores of troops were said to have entered the main square of Almaty, Kazakhstan on Thursday where hundreds of people were protesting against the government for the third day.

Gunshots were heard as troops approached the crowd, according to Reuters witnesses, but the situation in the square had calmed down since then. Unverified video on social media showed troops patrolling Almaty’s foggy streets overnight, firing weapons, as well as widespread looting in the city.

According to Kazakhstan health ministry, more than 1,000 people had been injured during the protests, and more than 400 of them were in hospital receiving treatments.

Before now, Kazakhstan police said that its forces had eliminated tens of rioters in the largest city of Almaty as the unrest sparked by rising fuel prices boiled over into the biggest protests since independence in 1991.

The unrest began as protests against the rising price of liquefied petroleum gas, a fuel used by the poor to power their cars, but has since turned into anti-government riots feeding off deep-seated resentment over three decades of rule by former president Nursultan Nazarbayev and his hand-picked successor.