Kaduna Gov. insists on wiping out bandits, others… 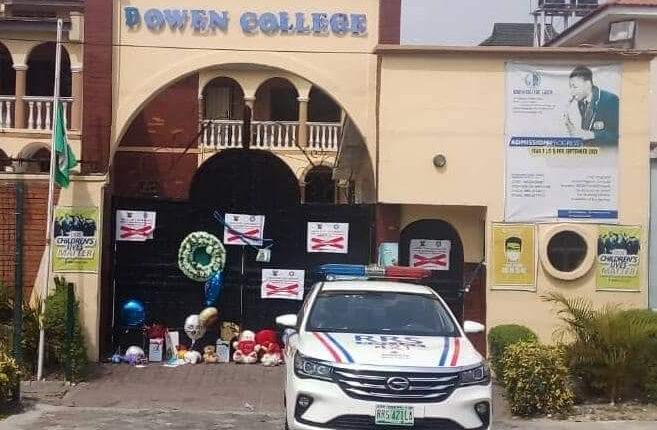 The Nigeria police Lagos command through its formation, Rapid Response Squad, RRS, has taken over the premises of Dowen College in Lekki, as a measure towards ensuring proper investigation of the circumstances surrounding the death of a 12-year old boarding school student, Sylvester Oromoni Jnr.

At the school, the RRS has stationed personnel and vehicle at the entrance of the school to prevent anyone from going against the directives by the Lagos State Government that all activities within the premises should cease indefinitely, pending investigations on Oromoni’s death.

Also, it was learnt that the law enforcement agency took over the premises in order to prevent interference with possible evidence that could assist its personnel in the ongoing investigation to unravel the truth about the teenager’s death.

This development around the school premises was discovered on Monday as Nigerians demanded a thorough investigation on the death of Sylvester Oromoni Jnr, who was said to be the nephew of Delta State Deputy Governor, Kingsley Otuaro.

Findings by The Guild revealed that everyone including non-teaching staff within the premises were evicted yesterday by officials of the Lagos State Government and personnel from the law enforcement agency before the premises were resealed.

After the premises was resealed incompliance with the Government directives of a total shutdown, the Lagos State Commissioner of Police, Hakeem Odumosu, was said to have mandated the RRS  to position its patrol vehicle at the gate of the school and monitor the surroundings.

The directive by Odumosu, was said to have been conveyed to the personnel by the Commander of RRS, Olayinka Egbeyemi, who briefed the patrol team before their deployment.

Egbeyemi, while deploying the personnel, charged them to be professional in the discharge of their duties and that they should leave no stones unturned towards ensuring actualization of the task of preventing access to the premises until further notice.

It was earlier reported by The Guild that intervention of the government came days after the family of the deceased student raised alarm and alleged that their son was killed following his refusal to join a cult group in the state which includes the son of the late senator, Buruji Kashamu.

And to ascertain if the claims made by the family were true or not and to determine the role played by the school management after the deceased was said to have sustained injuries within the school premises, the Lagos state government directed that the premises be shutdown.

Announcing the closure after a meeting with the School Management and Staff, the Commissioner for Education, Folasade Adefisayo, said that the move was to give room for adequate investigations on the former student’s death.

Through the statement made available to The Guild by the Head of Public Affairs for the ministry, Ganiu Lawal, the commissioner appealed to Nigerians particularly Lagosians for calm, saying no effort will be spared in getting to the root of the incident.

Earlier, Adefisayo explained that investigations would unravel what led to the injuries sustained by the deceased and other details needed to help establish the truth on the case after the family and the school management began to trade words.

She hinted that preliminary investigations revealed that the deceased was indeed enrolled as a student of the College in its boarding facility and that he was treated by the school’s medical personnel after sustaining the injuries.

The commissioner stated that it was after the treatment that the school management requested that the parents take the former student away for further care.