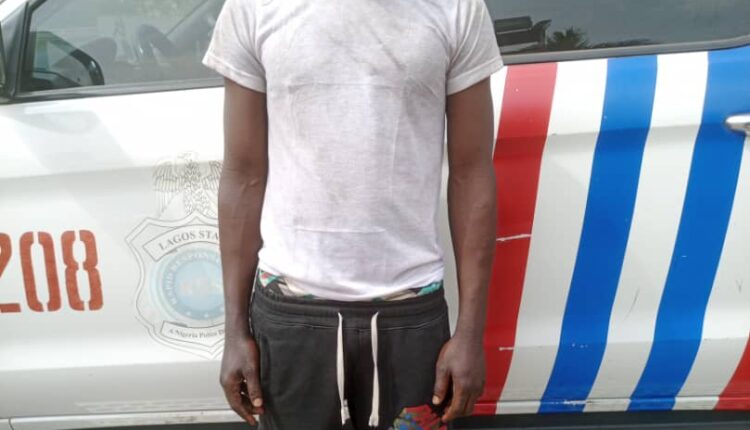 The robber was reportedly apprehended for the third time by the RRS around Ketu axis of the State shortly after threatening a motorist with an unidentified object and thereafter dispossessed him of his N7,000 in traffic.

Working with an accomplice identified as Ahmadu, Abubakar stated they threatened to smash the side mirror of their victim if he failed to release the money in his pockets, adding that their victim gave up the N7,000, which they shared immediately.

He further disclosed that he met his accomplice at Otedola Bridge and they decided to rob in traffic, adding that after their robbery, their victim immediately alerted RRS officers close to the scene and the law enforcement agency arrested him while Ahmadu escaped.

Abubakar was said to have confessed that he went into robbery again to raise money to pay off his debt after his release from prison four weeks ago.

While narrating what drove him into the act again on Friday, he explained that he had borrowed some money after his release from the correctional centre to buy drugs, adding that the creditor became too persistent, it left him with no choice than resorting to traffic robbery in order to rake up money to offset the debt.

Based on the directive of the Lagos State Commissioner of Police, Hakeem Odumosu, Abubakar has been charged to court for prosecution.

As learnt, Abubakar released profile by the Decoy Team of RRS had revealed that he was arrested in Ketu for traffic robbery on 16th June, 2021 and he was sentenced to three-month imprisonment.

Also, on 19th September 2021, he was said to have been arrested again in Alapere for traffic robbery by RRS patrol team but transferred to Alapere Divisional Police for prosecution and sentenced to two-week imprisonment.