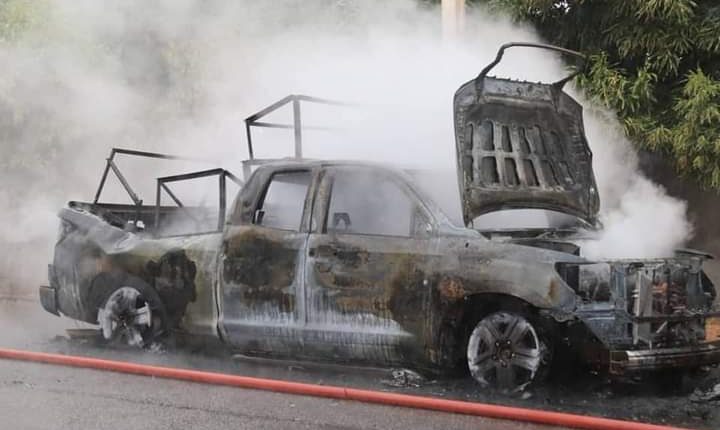 There was confusion around Pantami township stadium in Gombe State when one of Governor Muhammadu Yahaya’s campaign vehicle went up in flames after the second year anniversary celebration of his administration in the state.

The branded pickup vehicle was said to have suddenly went up in flames a few minutes after leaving the stadium, an incident that attracted some residents and passers-by, who helped to put out the fire.

As gathered, before the vehicle was wrecked by fire, it was conveying public address systems and other equipment including the generators used to source for power supply.

An eyewitness, who watched after the vehicle cut fire yesterday, narrated that the incident happened when the generating set powering the musical instruments attached to the vehicle got overheated as a result of intense heat and exploded.

He added that the fire from it spread to other equipment as well as wrecked the vehicle that was already parked at Government Residential Area (GRA) Gombe.

According to him, efforts by emergency officials from the Gombe State Fire Service and residents to put off the fire before it wrecked the entire vehicle proved abortive.

An aide to the governor, who also confirmed the incident, commended the residents and emergency officials, saying there is no life lost.