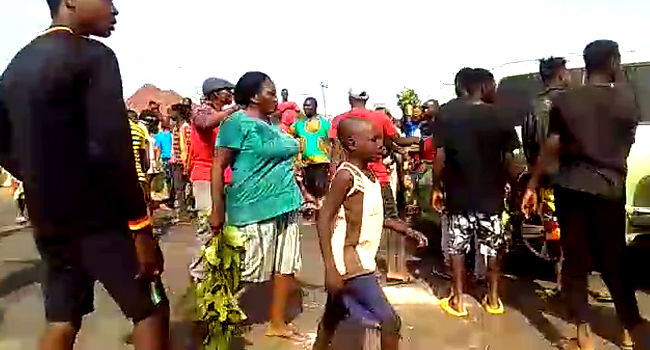 Hundreds of commuters on Abuja-Kaduna Highway were held back from accessing their destination after Kaduna State residents barricaded the road to protest against the incessant abductions of students and bandit attacks across the state.

The dozens of protesters, who defied the scorching sun to demonstrate, halted vehicular movement including the convoy of a military officer, at the Gonin Gora end of the highway in Chikun Local Government and demanded an immediate improvement in security within the state.

It was learnt that the protesters, in their numbers, barricaded the busy road with stones and wood, insisting that no one would be allowed passage until the State Governor, Nasir El-Rufai, visit and state reasons for an increase in bandits attacks and other criminalities.

As gathered, the demonstrators, who were armed with leaves, stormed the road hours after bandits stormed the community on Saturday morning and abducted four members of the Ungwan Auta community at the early hours of the day.

It would be recalled that Gonin Gora, like some other communities in Chikun Local Government Area had been experiencing incessant attacks and kidnappings by bandits, a situation which many of the residents described as worrisome.

The demonstration came barely 24 hours after the State government disclosed that a total number of 323 people were killed by bandits in Kaduna State between January and March 2021.

The Commissioner for Internal Security and Home Affairs, Samuel Aruwan, who presented the figures during the state security report meeting explained that of the 323 people killed by bandits during the period under review, 292 were males and 20 were females.

He added that a total of 949 people were kidnapped by bandits during the period, while Kaduna Central senatorial district accounted for 236 deaths within Birnin Gwari, Chikun, Igabi, and Kajuru Local Government Areas.