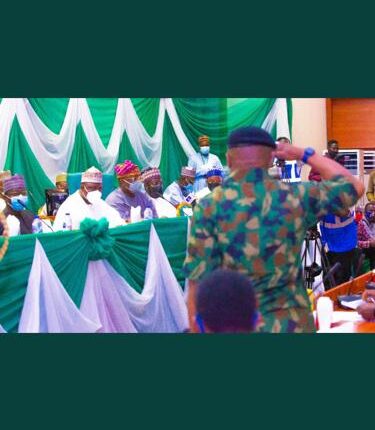 The House of Representatives has grilled the newly appointed service chiefs on insurgency, banditry, and other security challenges confronting the country and possible solutions to restore peace and harmony across Nigeria.

The panel was headed by the Chairman of the House Committee on Defence, Babajimi Benson, with chairmen of the committees on Army, Abdulrazak Namdas; Navy, Yusuf Gagdi, and Air Force, Shehu Koko as co-chairmen, and was held at the National Assembly.

Speaking at the opening of the hearing, Benson assured Nigerians that the nominees would not be given ease approval considering the post they held in the country.

“Areas in which they will be questioned include professional skill and experience, Nigeria’s war on terror and insurgency and insecurity in general, funding of the military and strategic security knowledge and vision of the nominees as well as welfare of military personnel.”

He further said Nigeria was blessed with brave and gallant soldiers, many of whom have paid the ultimate price in service to the country.

According to him, it is to their memories that we must get it right with our National Security and help secure the peace for which they gave their lives.

He said from the inception of this 9th House, national security has been discussed more than 200 times at plenary, but that the nation is still grappling with diverse and increasing security challenges, despite some successes recorded by the gallant men/women of the Armed Forces.

The speaker of House of Representatives, Femi Gbajabiamila, last Wednesday addressed a letter of nomination by Buhari pursuant to the provisions of Section 18 (1) of the Armed Forces Act, Cap A20 Law of the Federation of Nigeria 2004.