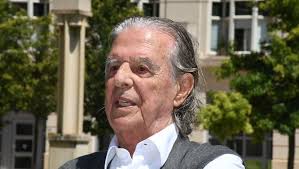 An internationally renowned  architect, Ricardo Bofill, designer of dystopian monumental buildings, has passed on at the age of 82 following a brief illness reportedly related to Covid-19.

The popular Spanish  architect, who was said to have notably designed in Francethe Antigone district in Montpellier and the spaces of Abraxas in Noisy-le-Grand, was said to have died few hours ago.

Confirming his demise on Friday, his son, Pablo Bofill, said that the famous architect was battling complications from Covid-19 before he gave up the ghost few hours ago.

As gathered, During his six-decade long career, Bofill designed a series of monument deemed ‘postmodernist’ by Architectural Digest magazine that mixed modern materials such as steel and concrete with classic forms and geometries such as columns.

Besides the sail-shaped 29-floor Hotel W Barcelona tower located on Barcelona’s beachfront, Bofill is also famous for designing in the seventies and eighties huge social housing projects in French suburbs.

Some of these projects were later used to shoot dystopian movies such as Terry Gilliam’s ‘Brazil’ in the 1980s and ‘Hunger Games’ in the last decade.