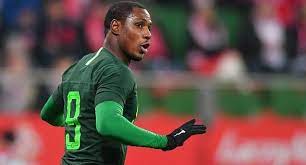 The choice of Super Eagles coach, Gernot Rohr, to recall Odion Ighalo, back to the national team has elicited mixed reactions from football lovers.

For.some of these soccer enthusiastics, Ighalo’s return to Super Eagles was a drawback for the ongoing efforts to build a team of younger players that could compete in the future for the country, while other sports lovers have applauded the decision by the Nigerian Football Federation (NFF) and the coach to bring back the striker to solve the goal-scoring challenges currently been battled by the team.

Many, who questioned Rohr’s decision to bring back the forward, said the move would prevent the team’s young strikers from growing, with the returning forward taking their place.

One of the soccer lovers that expressed his views on the issue after Super Eagles coach announced a 25-man list for the upcoming game, Ogor Samuel, described the move as a wrong act that should correct way.

“Odion is a great footballer, who has made his mark in Africa but bringing him back when we have young strikers scoring for fun all over Europe is not a step in the right direction. We need to groom the young ones into matured players,” he stated through his social media handle.

Another football lover, Precious Oletu, said Rohr’s desire to bring back Ighalo showed the coach lacked the ability to manage different sets of players available in the country.

“I hope Odion continues to play for the Super Eagles forever. If a manager cannot make do with what he has at his disposal and keeps going back to retired players, then, it puts a question mark on his ability. How can you miss Ighalo when you have Victor (Osimhen), Kelechi (Iheanacho), (Taiwo) Awoniyi, and more”.

Seunara Adedira added, “Rohr has a knack for downplaying his team’s maturity. He referred to these lads as neophytes at the last World Cup. Curiously years later, they still are, ostensibly. Ighalo will do well to decline. The butterfly effects are totally avoidable.”

Meanwhile, other soccer lovers have commended the coach and the country’s football body for taking the bold bring back the striker, who currently plays for. Saudi Arabian football club.

They believe that what the national team had lacked over the years since his retirement was experience which the former Manchester United striker possessed, saying his experience will benefit the squad in the Africa Cup of Nations scheduled to hold in Cameroon next year, 2022.

A proponent of the idea, Isaiah Kalu, said that the loss to the Central African Republic in Lagos, also showed that the team lacked depth and that this is what the 2019 nations cup highest goal scorer would provide for Super Eagles.

“There is nothing wrong in having some years of experience in the dressing room to help the younger ones. Anyway, everyone has an opinion. But recently following some injuries, we struggled against the Central African Republic,” he added.

Another supporter, Jidekoma Anuforom, said: “I don’t blame Rohr one bit, Ighalo has always thrived in the national team and Rohr hasn’t hidden the fact that he has been trying to convince him to rescind his 2019 retirement decision.”

Ighalo was included in Rohr’s 25-man team for the 2022 World Cup qualifiers against Liberia and Cape Verde, which would take place later this month.

The striker returns two years after his last tournament for the country, 2019 Africa Cup of Nations in Egypt, where he was the highest goal scorer and assisted the country to finish third.

After that tournament, the striker on July 20, 2019, announced his retirement, saying he wanted to “focus on club football and give the younger players an opportunity to develop and progress.”