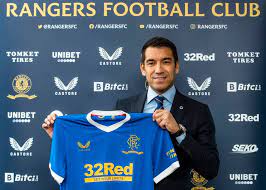 The management of Scottish football giant, Rangers, has appointed Barcelona’s former player, Giovanni van Bronckhorst, as manager of its team, following the resignation of Steven Gerrard from the position to manage Premier League side Aston Villa.

Van Bronckhorst has signed a three-and-a-half-year deal that takes him up until the summer of 2025 and would be expected to restore the team’s pride including winning the league, competition, and progressing to the knockout stage of the  Union of European Football Associations Champions league.

The Dutch ex-international was announced on Thursday by the management, but his tenure as manager of the team would be subjected to receipt of a work permit.

Van Bronckhorst, who played for the Scottish team between 1998 and 2001, as well as Arsenal, returned to Ibrox 20 years after assisting the club to win five trophies including two league titles.
The 46-year-old Dutchman, who led Feyenoord to his country’s title, would taste the first action during next Thursday’s Europa League game against Sparta Prague, when they would be hunting for qualification from their group.
Speaking to newsmen after his unveiling ceremony, Van Bronckhorst, whose last job in management was a year with Guangzhou R&F in China, said he was “absolutely delighted” to become Rangers’ 17th permanent manager.

“I feel so lucky to be going to work with a squad which is in a great position on all fronts and largely has that experience of being winners,” he added.

“I look forward to carrying on and enhancing the work that has been done already and I’m grateful for the chance to work again at this huge football club. I cannot wait to meet the club’s incredible supporters again and begin this new era for us all.”