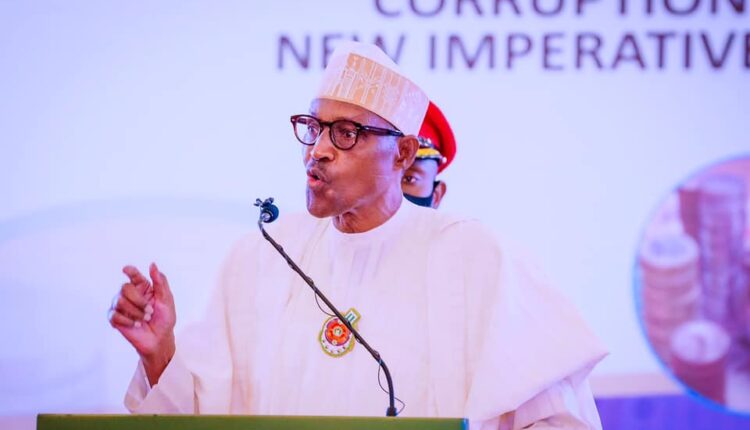 President Muhammadu Buhari has disclosed that his administration would not hesitate to punish and jailed public servants, experts, Heads of Ministries, Departments and Agencies (MDAs) that fraudulently present new projects as on-going projects and engaging in different forms of budget padding.

He warned that the Federal Government would sanction those bringing in personnel into the public workforce through illegal recruitment, or pad their payrolls and retain ghost workers.

According to him, we reduced the cost of governance by maintaining our promise to complete abandoned or on-going projects started by previous administrations.

“We have ensured that MDAs did not put forward new capital projects at the expense of on-going projects. Government has, however, noted from the activities of the ICPC that some MDAs have devised the fraudulent practice of presenting new projects as on-going projects.

‘‘Necessary action and sanctions will continue against the heads of such errant MDAs. I am confident that ICPC will continue to maintain the vigilance required of her by the ICPC Act in this regard,’’ the president said on Tuesday at the State House, Abuja, during his address at the 3rd National Summit on Diminishing Corruption in the Public Sector themed ‘Corruption and Cost of Governance: New Imperatives for Fiscal Transparency.’

The president described the summit with the theme: “Corruption and Cost of Governance: New Imperatives for Fiscal Transparency,’’’ as auspicious. He noted that it reminded Nigerians of the negative impacts of unnecessary cost of governance.

He added that the theme also offered an opportunity for stakeholders to offer suggestions on ways to further reduce the cost of governance and promote transparency and accountability in government expenditure.

‘‘I am delighted that the Legislative and Judicial arms of government are also under focus on managing the cost of governance. Government is collective and is not the business of the Executive branch alone. On Aug. 19, 2020, the Federal Executive Council adopted the National Ethics and Integrity Policy which I launched on Sept. 25, 2020.

‘‘I am delighted that some public officers continue to demonstrate the core values of ethics, integrity and patriotism, and have been identified for their sterling anti-corruption disposition in their workplaces,’’ President Buhari said.

In his remarks, ICPC chairman, Prof. Bolaji Owasanoye, reiterated the commitment of the commission to supporting the programmes and projects of government aimed at restraining the spiralling cost of governance.

He noted that the astronomical cost of governance at the federal and sub national levels had continued to reflect in the huge wage bill on personnel and operational cost standing at about 70 per cent of annual budget.

He identified illegal recruitment, illegal and unilateral increase in wages and remuneration by some MDAs as some of the factors responsible for high cost of governance and rising personnel budget.

Other factors, he said, were indiscriminate local and international travels, unreasonable demands by some political appointee board members of MDAs and budget padding.

According to him, ICPC is investigating some cases of illegal recruitment forwarded to it by the Office of the Head of the Civil Service of the Federation.

He said that the Ministry of Labour and the University College Hospital, Ibadan, and some employees of other MDAs had been implicated in illegal recruitments.

“This abuse of power is consummated with complicity of compromised elements in IPPIS. These cases are currently under investigation. At another level, a syndicate of corrupt individuals within the Service corruptly employ unsuspecting Nigerians and issue them fake letters of employment.

“They fraudulently enrol the recruits on IPPIS and post them to equally unsuspecting MDAs to start work. ICPC is prosecuting one of the leaders of the syndicate.

“From his custody, we retrieved several fake letters of recommendation purportedly signed by the Chief of Staff to the President, ministers, Federal Civil Service Commission and other high rankings Nigerians,’’ Owasanoye said.