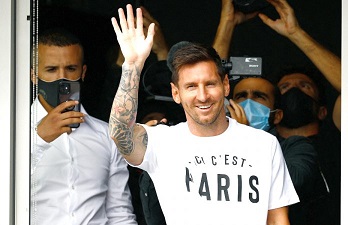 Paris Saint-Germain social media pages have recorded a surge in its engagement by football fans across the globe, particularly French supporters after a video clip of former Barcelona forward, Leonel Messi, signing a two-year deal got over 19 million views less than six hours after it was released online.

The French club posted a Twitter video teasing his arrival, accompanied by the words “New diamond in Paris”, with a press conference scheduled for Wednesday morning.

Wearing a T-shirt that read “This is Paris”, Messi beamed and waved at scores of fans who had come to greet him at Le Bourget airport on the outskirts of the French capital after his flight from Barcelona.

Chanting “Messi, Messi, Messi”, the fans cheered and let off firecrackers. “It’s going to be mad. After all, it’s a legend who is arriving,” said Florent Chauveau, a PSG fan who has been back and forth to the airport every day since Sunday in the hope of seeing Messi arrive.

The six-time Ballon d’Or winner arrived in Paris on Tuesday afternoon to seal his move to the French club on a two-year deal – with an option for a third – worth £25m per year after tax, plus bonuses.

As stated, the 34-year-old who will receive a £25m signing-on fee as part of the move – was set to extend his 21-year stay at Barcelona by signing a new five-year deal this summer.

However, the club announced last Thursday that “financial and structural obstacles” meant the deal could not be completed, meaning Messi left as a free agent.

The 34-year-old said he wanted to stay at Barcelona and “did everything” he could to remain at the club, including agreeing to a 50-per-cent wage cut.