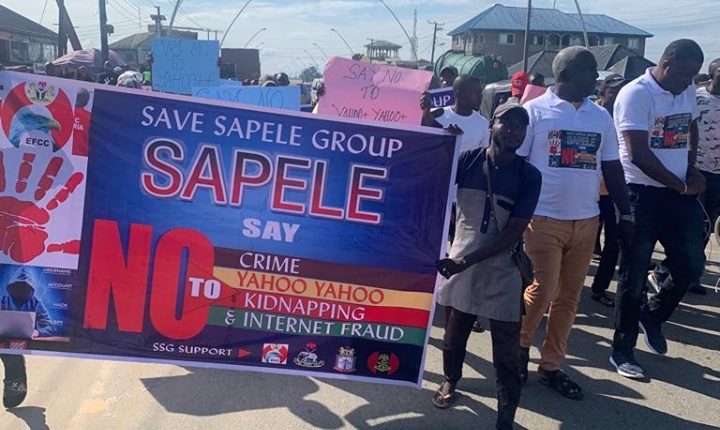 Activities on roads in Sapele, Delta State on Tuesday were disrupted by hundreds of youths protesting against hike in internet fraud and other illicit acts within the state.

This protest came barely three days after another group of youths staged a protest kicking against operatives of the EFCC for arresting some suspected internet fraudster at their hideout in Sapele.

The youths under the aegis of “Save Sapele Group” demanded that the Economic and Financial Crimes Commission, EFCC, must rid the state of cybercrimes and other forms of economic and financial crimes.

The youths under the aegis of “Save Sapele Group” in their hundreds carried banners and placards bearing various messages such as “Sapele Say No to Crime, Yahoo, Yahoo, Kidnapping and Internet Fraud.” Others carried placards with messages: “Say No to Corruption,” “Protect our Youths, Daughters, and Sisters – Say No to Yahoo Yahoo ” “Say No to 419″ and many more. They also wore T-shirts with inscriptions condemning internet fraud popularly known as yahoo yahoo.

In their message, the youths said the protest was to condemn the activities of some misguided elements who engages in despicable activities such as internet fraud, cybercrimes, and Kidnapping in Sapele.

“We don’t want yahoo, Yahoo. We don’t want internet fraud, we say no to 419 and ritual killing”. They said Sapele Town was for commendable activities and not condemnable act or criminalities.