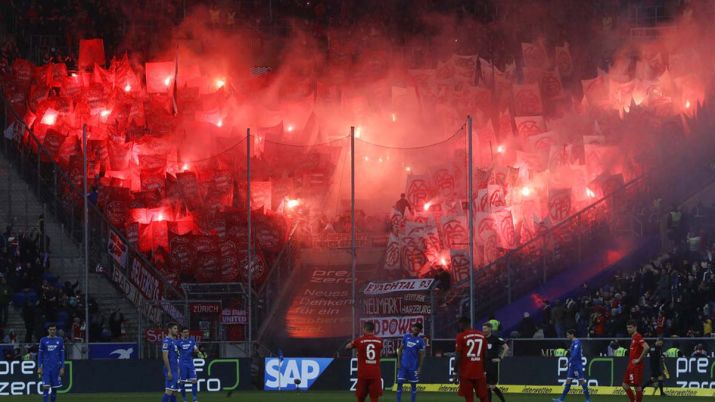 Week 24 match between Hoffenheim and Bayern Munich was on Saturday marred by a protest that compelled the referee to suspend the game for several minutes.

Even after the protest championed by Bayern fans subsided and the referee was persuaded, the match could not continue as players passed the ball between each other for 13 minutes after a long delay for an offensive banner in the crowd.

The protest, which started during first half of the game, intensified after Bayern scored the sixth goal with Hoffenheim fans unfurled an offensive banner about the club’s president, Dietmar Hopp.

Worried by the implication on their team, Bayern’s staff and players begged their fans to put the banner away before the referee, Christian Dingert, took players down the tunnel, as an act to compel the fan to bring down the banner.

The match eventually restarted from 77 minutes, with fans told it would be abandoned if the banner appeared again. Bayern’s and Hoffenheim’s players then just kicked the ball between themselves – with goalkeepers not in their goals – to get the game to its conclusion.

At the final whistle, 79-year-old Hopp was given a standing ovation alongside Bayern chief executive, Karl-Heinz Rummenigge, and the players on the pitch in a show of solidarity.

Hopp is a divisive character in German football, having bankrolled Hoffenheim up from the fifth tier, one of three exceptions to the 50+1 rule which means members must own more than half the shares in their club.

Hoffenheim were in the fifth tier when Hopp first invested in the club in 2000 and rose through the divisions to reach the Bundesliga in 2008.

In 2015, Hopp was allowed to take a majority voting share. Only three Bundesliga clubs do not have fans with the majority of shares but the other two – Bayer Leverkusen and Wolfsburg – were both founded as works clubs.

Bayern’s fans are not the first to protest against Hopp. In fact just last weekend a similar banner from Borussia Monchengladbach fans saw their Bundesliga game delayed.

And earlier this month Borussia Dortmund fans were banned from away games against Hoffenheim for the next two seasons.

Reacting over Bayern fans’ action, Rummenigge condemned the action, assuring Hoffenheim management that appropriate actions would be taken on the case.

“I am deeply ashamed for the behaviour of these people. That is inexcusable. It is the ugly face of football. I have apologised to Dietmar Hopp. We have filmed everything and these people will be held accountable,” he said.