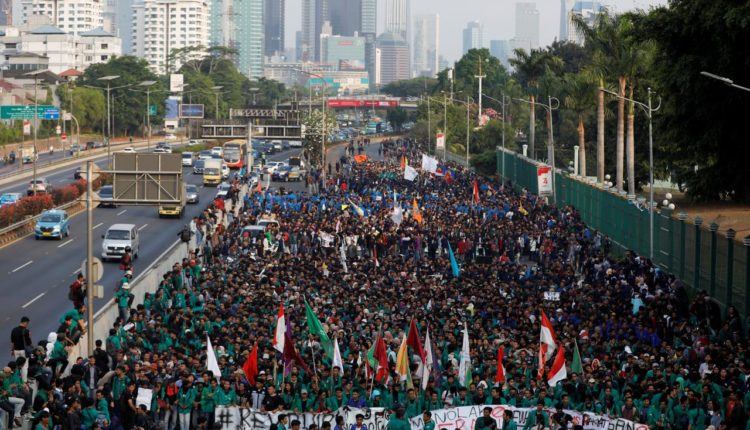 Thousands of students protested at rallies across Indonesia on Monday against a new criminal code that would outlaw sex outside marriage and gay sex, as lawmakers met the president to discuss how to proceed with a bill that has divided Indonesians.

President Joko Widodo on Friday ordered a delay in a planned vote on the controversial bill – originally slated for Tuesday – and said 14 articles needed further review before it was deliberated by a new parliament, whose term begins next month.

Students rallied on Monday in the capital Jakarta – where some climbed the gates of the parliament to hang banners – and cities including Yogyakarta, in central Java, and Makassar, on Sulawesi island, to oppose the bill.

Meanwhile, lawmakers whose term will end this month met in the presidential palace for talks with the president.

“The bill was delayed so that we could get input, better substance that is in accordance to what the people want,” Widodo told reporters after the meeting, adding the code could be included in the next term of parliament.

Mulfachri Harahap, an MP, said he still hoped a new version could be put to the vote before the end of the month, adding: “Even though there are articles considered problematic, they are not many and they’re debatable.”Critics say the bill violates free speech and discriminates against religious minorities, women and LGBT people. But Islamic groups, including Indonesia’s biggest Muslim group, Nahdlatul Ulama, say the changes reflect “the character and the personality of the Indonesian people and the nation”.

The revisions to the country’s criminal code, which has not been updated since its inception during the Dutch colonial-era, also include penalties for insulting the president’s dignity, a four-year jail term for abortions in the absence of a medical emergency or rape, and a prison term for black magic.

The planned revisions had spurred Australia to update its travel advice, warning citizens of risks they could face from extra-marital or gay sex should the law be passed.

Bali, a Hindu enclave in mostly Muslim Indonesia and the country’s most important tourism destination, is especially popular with visitors from Australia, where one newspaper greeted the news on Friday with the headline: “Bali Sex Ban.”

“I think it’s crazy, because there’s a lot of couples coming to Bali on, like, a romantic holiday, and they are not married, they might be just a boyfriend or girlfriend,” said Sienna Scott, an Australian holidaying on the island.

Local officials said they hoped there might be changes to the bill before it becomes law. “If possible, articles which are sensitive to our lives in Bali can be reviewed or eliminated,” Bali deputy governor, Tjokorda Oka Artha Ardana Sukawati, said.

In Jakarta, students protested in front of parliament against the criminal code and also changes to the anti-graft laws that opponents fear will harm the fight against corruption.

“Because reform has been corrupted, we want the country to go back to the reform mandate,” said Manik Marganamahendra, 22, a student at the University of Indonesia.