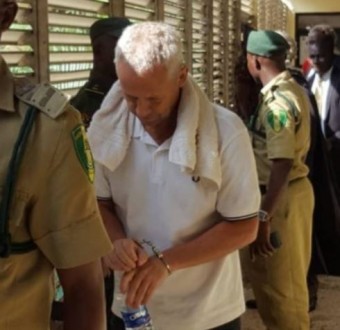 Neilsen is being prosecuted by the state for an alleged murder of his wife Zainab Nielsen and his three (3) year old daughter, Petra Nielsen.

At the resumed hearing on September 20, 2019, the Prosecution led by Ms. Titilayo Shitta Bey (Solicitor General and Permanent Secretary, of the Lagos State Ministry of Justice) concluded their case.

The State’s ninth (9th) witness was examined and cross-examined for over three (3) days. The prosecution called the total number of Nine witnesses and closed their case.

Somiari under the cross extermination by Shasore on Friday, stated that the Defendant’s DNA was found in the apartment and on the night gown of his deceased wife.

He testified further that the Defendant’s DNA was not found anywhere on the body of his deceased daughter, nor in the kitchen where the bodies of both deceased persons were discovered.

The expert however stated he found DNA of an unknown female in the kitchen.

When confronted that the crime scene investigation and forensic DNA analysis was deliberately aimed at gathering evidence and arriving at results showing that the Defendant was guilty of the murder, Dr Somiari denied it.

Although Somiari stated that the forensic DNA team took necessary measures to prevent contamination of the crime scene by putting on personal protective gear comprising gloves, shoe covers, and disposable laboratory coats, however when he was later shown photographs from his visit to the crime scene, he admitted that some members of the DNA team did not put on the protective gear.

Somiari was also unable to account for the number of people that had access to the crime scene in the period between the discovery of the bodies and the examination of the crime scene by forensic experts.

The prosecution witness also informed the court that samples for DNA analysis were only taken from 3 occupants of the apartment; the Defendant and the two deceased persons even though 6 people lived in the apartment at the time of the murder.

The Court has adjourned the matter to 25 October 2019 for continuation of trial.

It is expected that the defence would open its case on that day.