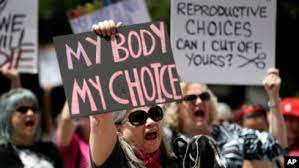 Dozens of activists against abortion and pro-abortion rights groups have taken to the streets of  Washington, United States, to protest on illegalizing abortion in the country.

While the pro-abortion rights groups kicked against plans by the Supreme Court to overturn the 1973 Roe v Wade ruling that legalized it, the activists against the act have commended the apex court decision and it would reduce cases of unwanted pregnancy and protect unborn child in the country.

Both groups took to streets after news filtered in that the Supreme Court was already embarking on the move to review and do away with the 49-year-old judgement.

The members of both groups converged on major streets on Tuesday and chanted different slogans to back their stance on abortion for women in the seat of power, while the anti-abortion shouted Wade has got to go, members of groups backing abortion argued that abortion is part of healthcare services.

The group, who paraded outside the court, said that a draft has been circulating that states that the court has voted to overturn Roe v. Wade, in which the Supreme Court and the White House have declined to comment on the spreading rumour.

According to an associate justice of the  U.S Supreme Court, Samuel Alito,  the Roe v. Wade’s verdict in 1973 was wrong from the start and must be reviewed and upturned.

He added that the court should investigate the Roe v. Wade decision that allowed abortions to be performed before a fetus would be viable outside the womb, between 24 to 28 weeks of pregnancy was wrongly decided because the U.S. Constitution made no specific mention of abortion rights.

“Abortion presents a profound moral question. The Constitution does not prohibit the citizens of each state from regulating or prohibiting abortion.”