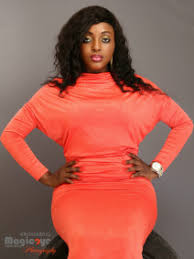 The actress published the pictures through a post on her official Instagram page on Tuesday, showing before and after images of herself and the child.

She noted that the growth and transformation depicted in the pictures were due to grace received from God.

Mimiano, who made the post in her native Yoruba language, said that, “Aanu ni mo ‘ri gba”, meaning: “I received mercy from God”.

Thanks to Nigerian health workers at COVID19 frontline- Atiku’s son