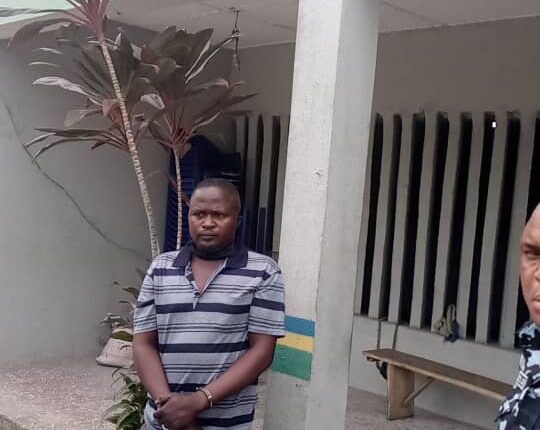 The Nigerian Police has arrested and detained an inspector, Jonathan Company, over the murder of a 45-year-old man, Jelili Bakara, allegedly killed during a face-off between him and the deceased in Sangotedo axis of Lagos State.

As gathered, the deceased businessman popularly called ‘Baba Abu’, was shot dead by the law enforcement officer during the face-off that occurred at Quinox lounge at about 11:30 pm.

It was learnt that after committing the act, the detained policeman, attached to the Mounted Troop, Force
Animal Branch of the Nigeria Police, fled the scene on 18th March 2021.

Barely nine days after the act including appeal from the deceased wife, Kafayat, Jonathan was apprehended by the Nigerian Police, Lagos Command.

Confirming his arrest and detention, Commissioner of Police, Hakeem Odumosu, announced the development on Saturday when he led other officers to pay a condolence visit to the deceased family.

The Commissioner of Police, who was received by the Olori Ebi of the Bakara family in Ajiran Land, Eti-Osa Local Government of Lagos State, Yekini Olawale, the mother, wives and children of the deceased at Ajiran axis, further assured Nigerians that the justice would be ensured to serve as deterrent to others.

Odumosu added that he has ordered that the inspector be tried in orderly room and on completion of the exercise, he would be charged to court in no time.

According to him, the family of the deceased deserves justice on the matter and the Nigerian Police will ensure that they get whatever they deserved.

The commissioner, in a statement by Command spokesman, Olumuyiwa Adejobi, explained that the reason for the delay in the visit was to ensure that the family get justice and that the officer that fled be apprehended.

“Immediately after the incident, the Inspector fled but was eventually arrested by the Divisional Police Officer Ogombo Division, Lagos State. The suspect, Jonathan Company, m, has been moved to the State Criminal Investigation Department for proper investigation”.

The Commissioner of Police therefore assured the general public that the command will consistently uphold the core values and principles of policing so as to have adequate protection of lives and property in the state.

It would be recalled that Jonathan was alleged to have been drunk while on duty and shot sporadically into the air, which threw the whole community into pandemonium as everyone scampered for safety.