Police turns bandits away, recover rams, others in Katsina 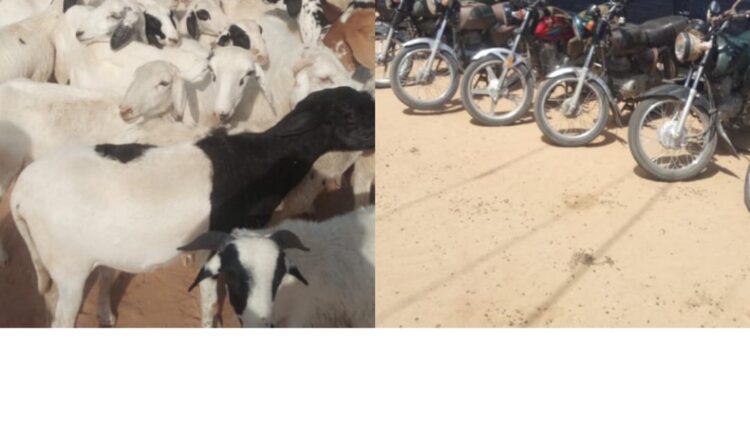 In a bid to protect lives and property in Katsina State, the Nigerian Police has turned away scores of armed bandits that attacked Batsari community and recovered animals and ammunition in the state.

As gathered, the bandits were repelled by a group of personnel attached to Operation Puff Adder that was deployed to forestall possible attacks within Shekewa village, one of the communities considered to be a hotbed of insecurity in the state.

It was learnt that scores of the armed bandits escaped with gunshot wounds, as 29 sheep, 24 goats, seven motorcycles, an AK 47 riffle were recovered by the personnel of the law enforcement agency after their operations in Shekewa village – exit route to Dumburum forest in Batsari council.

The Katsina Police Command spokesman, Gambo Isah, who confirmed the development in a statement made available to The Guild, disclosed that the law enforcement agency engaged the hoodlums into a fierce gun battle and repelled their attack.

In the statement released on Tuesday, Isah said the uncommon courage and tactical operational strategy adopted by the security operatives made the bandits flee into the forest with varying degrees of bullet wounds.

He said: ” On 20/04/2021 at about 06:00hrs, DPO Batsari led operations “Puff Adder” and “Sharan-Daji” to Shekewa village – exit route to Dumburum forest and successfully repelled bandits on a heinous mission. The team engaged the hoodlums in a fierce gun battle and repelled their attack.

“The doggedness, uncommon courage, and tactical operational strategy adopted by the security operatives made the bandits flee into the forest with varying degrees of bullet wounds. In the course of profiling the scene, one (1) Magazine of thirty rounds of 7.62mm lives ammunition of AK 47 rifle, Twenty-Nine (29) Sheep, Twenty-Four (24) Goats, and Seven (7) motorcycles were recovered at the scene.”

“The Command urges members of the public to cooperate with security agencies working at the frontline areas by giving them credible information on bandits and their collaborators, especially those supplying them with arms and ammunition, informants, and other essential commodities.

“The Command assures members of the public that the command remains resolute and committed in the ongoing fight against recalcitrant bandits until they are arrested and dealt with according to the extant laws of the land,” the spokesman added.