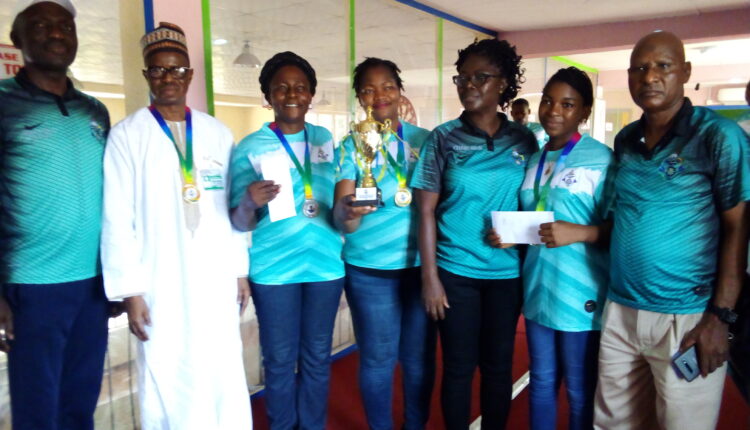 No fewer than six Police officers and a 14-years old girl won medals during the 1st Inspector General of Police Dart Competition, organised to boost law enforcement personnel intelligence gathering and get them involved in sporting activities across the countries.

The competition, according to the organisers, was to also assist the officers to critically think and to professionally assess security situations around them often.

During the five-day tournament, two of the Police representatives, Tobiloba Talabi and Grace Williams, won the gold medals during the 501 singles male and female categories respectively.

Other female medalists were: 14-year-old Ayomide Ogunnowo, who represented the Lagos State Dart Association, got silver while Kehinde Bokinni from the association went home with the bronze medal.

Also, other male medalists include: Adeyemi Saheed, who won a silver medal while Olaore Olatunde, won bronze medals,  they represented the Nigeria Police Force during the exciting event.

Notably, Adeyemi Saheed scored 180 points during the competition, which is the highest point in Dart game.

After presenting the medals to the winners on Friday, at the Police College, Ikeja, Lagos, the Patron of Nigeria Police Darts Association, Muazu Zubairu, stated that the force has been the pillar of Darts in Nigeria, assuring that the law enforcement agency is determined to ensure its development.

“Talking about the history of dart in Nigeria Police Force, I can remember when we started, we had nothing not even a dartboard but today the determination and resilience has brought us thus far. Nigeria Police remains the pillar of Dart game in Nigeria,” he added.

While commending the Chairman of the association in Lagos, Martha Nwaokolo, he said that this year, Dart has hosted six championships which is the highest tournament hosted within the Nigeria Police Force.

Earlier, the Director of Sports, Patrick Atayero, stated that the association has recorded far more tournaments than any association in 2021, which shows their determination and good leadership.

On the promotion of Dart, Atayero noted that the Nigeria Police should be commended for its role over the years, stressing that the work lies on Federation and that they should begin to see the need to do so.

“I recommend the support of the IGP, Alkali Baba, towards promoting the sporting tournaments. We have had the first-ever IGP competitors in judo, tennis, badminton, and other sports and it speaks volumes about his personality,” he said.

Speaking to The Guild correspondent, Tobiloba expressed joy for his feat during the competition as a gold medalist, adding that he achieved his desire which was to triumph during the tournament.

“Winning is good. I have been winning both within the police and outside. This competition, being that it is the first open championship, I’m very happy to win because I had earlier promised myself that I must emerge winner and it makes me more excited to see it become a reality.

“We have been playing before now but it was only for police officers. However, the chairman of the association pushed the limit to allow civilians which is why we are having the first open championship”, he added.

In the same vein, Williams said: “I feel very great. I return all glory to God. If you train. Despite my training, he crowned my efforts. I believe if we organize more competitions. Going to schools to catch them young, will go a long way to popularize Dart as a sport especially in Nigeria.”

Another medalist, Ayomide also expressed happiness, saying that she came with less hope when she met her fellow competitors but she feels very proud of herself to have emerged second winning the silver medal.

She urged her fellow students to participate in Dart, noting that the game helps one to build intelligence, sharpens the mind, and helps one to be calculative.

” I’ll advice other students to play darts because when you start playing, you just fall in love with it, and like they say, Dart is life!” she said.