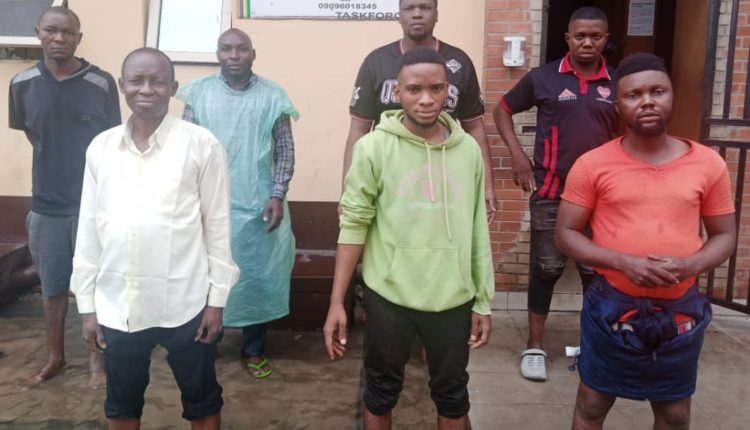 No fewer than twenty-one suspected cultists met their waterloo after operatives of the Lagos State Environmental and Special Offences (Enforcement) Unit (Taskforce) of Lagos Police Command stormed their hideouts and effect their arrest.

It said the operation followed the directive of the state’s Commissioner of Police CP Hakeem Odumosu as part of the Force’s commitment towards ridding the state off cultist, miscreants, and their activities.

The Chairman of the Lagos State Task Force, CSP Olayinka Egbeyemi, who led the enforcement team disclosed that the 21 suspects were arrested during an enforcement operation on criminal hideouts at Ogudu and Ajah area of the state.

Egbeyemi, through a statement by the Task Force’s Head, Public Affairs Unit, Adebayo Taofiq, noted that the arrested suspect mount resistance by attacking the police operatives in their bid to evade arrests during the raid, adding that some of them escaped through the roof.

“During the enforcement exercise, a large number of miscreants/cultists launched a serious attack on the officers with broken bottles, stones, axe, and other dangerous weapons from different spots including uncompleted buildings”.

Egbeyemi maintained that residence around the areas had lodged complaints of the attack of innocent members of the public by suspected miscreants and cult gangs especially in the early hours of the day and late at night, adding that property owners should support the government’s effort by taking charge of their properties and send out illegal occupants using their properties as hideouts for criminal activities.

He, however, said that the Commissioner of Police had further directed that all the 21 arrested notorious cultists be prosecuted in line with the government directive.

Meanwhile, Egbeyemi also disclosed that the operatives impounded 78 commercial motorcycles for engaging in illegal activities around Onipanu, Adekunle and Igbo-efon by Jakande area of Lekki.

He noted that the action was in line with the government’s directives on social distancing, use of nose-mask, and banned on activities of commercial motorcyclists across the state as part of efforts to curb the spread of coronavirus pandemic.

The Chairman said the Governor Babajide Sanwo-Olu led administration is doing everything possible to flatten the curve of the Coronavirus pandemic in the State and implored the citizens to strictly adhere to all the safety precautions issued, such as maintaining social distancing and usage of nose masks, by the government.