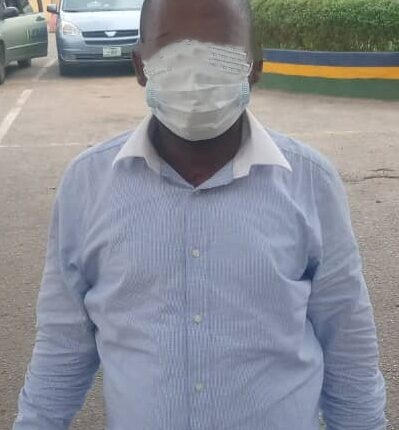 The Nigerian Police has revealed identity of the man intercepted and saved by Lagos State Governor, Babajide Sanwo-Olu, from jumping on Third Mainland bridge into lagoon over N500, 000 debt, as Adeyinka Abiodun.

It also revealed that debt incurred by the 45 years old master’s degree holder was paid by the governor two days ago after he narrated his ordeal to him.

The police, through a statement on Sunday released by its Public Relations Officer (PPRO), Bala Elkana, stated that Abiodun, was detained at Bariga Police Station where he revealed details on the loan and reasons for his action.

According to the police, Abiodun, who resides in Abaranje axis of Alimosho Local Government, in March 2020 secured a loan of N390,000 with a monthly repayment plan for six months and accrued interest of N142,287 from a microfinance bank in Lagos Island.

“The loan was obtained with the aim to upgrade his wine retail business, but the business failed and the money lost. He holds a Bachelor of Science degree in Physics and a master’s degree in business administration. He is married with two children. He is currently attending medical and counseling sessions.

“The microfinance bank was contacted and they confirmed the loan. The Governor of Lagos State, Babajide Sanwo-Olu, moved with compassion, came to the rescue by repaying the loan”.

Nigeria and the unelected leaders